Dublin's tanks begin to rumble and leave Louth in the dust 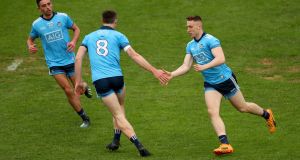 Louth were the last county to defeat Dublin in the pre-Heffernan era, all of 46 years ago but the march of time has expanded the distance between the counties to light years.

On Saturday night in Portlaoise, setting out in pursuit of the fabled five-in-a-row, the All-Ireland champions played with 14 men for three-quarters of an hour without breaking stride or sweat and consigned their opponents to a 26-point defeat.

It wasn’t flawless stuff; there were too many inaccuracies and blinks in concentration, especially in the first half – when they might have had three goals before eventually finding the net – but it was ultimately a decent enough outing for a team without a match in a couple of months.

Probably the main item of long-term significance was the appearance of Rory O’Carroll after a four-year absence – his last match was the 2015 All-Ireland final – in the full-back line. It was ideal acclimatisation if not exactly a rigorous road-test but it expands Jim Gavin’s options.

Dublin did hit an apparent speed bump in the 25th minute when Paul Mannion’s reckless full-on challenge on Conal McKeever brought a red card from referee Jerome Henry. It had no impact.

Leading by seven at the time, 1-7 to 0-3, the champions pushed on to lead 1-12 to 0-4 at the break and the casual observer, looking at them playing a spare man in defence would have been hard pushed to twig who was a man down.

Louth had started well and led initially by a point, scored when Ryan Burns, who had been the inspiration behind their comeback win against Wexford in the first round, cleverly created space around Cian O’Sullivan to collect the ball and score. It was an isolated moment of discomfort and David Byrne moved in to take up marking duties, leaving O’Sullivan to adopt a more familiar floating role.

It’s not clear whether the challengers felt that the absence of Dean Rock would make fouling a slightly more profitable exercise but if so, the misapprehension must have worn off by the time Cormac Costello curled over yet another free – his eighth plus 45 without missing – to close the half with his team 1-12 to 0-4 ahead.

In the second half Costello’s accuracy wavered slightly but even when he hit the post with a 38th minute free he was quicker than any of the defenders to the rebound and fired over the point – as if he wanted some scores from play to go with the dead-ball stuff.

He ended up with 1-12, including 1-1 from play and did everything he needed to – allowing for context – to press his claims to be one of the starting six but that will be a matter for a higher power.

Louth’s incessant fouling kept Costello busy kicking frees and he duly stretched Dublin’s lead – nine of their 12 first-half points came from his dead-ball accuracy – while Con O’Callaghan, fouled for at least half a dozen frees, knocked in the first goal after good work by Niall Scully.

The second half was a procession. Further goals by Brian Fenton, replacements Michael Darragh Macauley and Philly McMahon plus Costello ratcheted up the winning margin. Whereas the old familiar faces looked in good fettle, it was one of the newer generation, Paddy Small, who impressed with the energy and urgency he brought to a contest that was clearly over, who weighed in with a couple of unselfish assists for Macauley’s and Costello’s goals.

Louth haven’t had a bad year – a competitive league and an opening round championship victory – but this was way beyond their compass.

Dublin play the winners of Sunday’s Kildare-Longford quarter-final in then Leinster last four in a fortnight.