Short of the Dublin back line scoring own goals, it’s impossible to see how Louth will respond 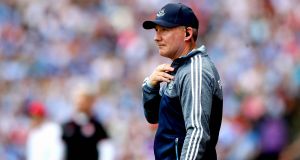 Dublin manager Jim Gavin. His calmness and measured tone has been a vital bulwark against hysteria and getting-ahead-of-oneself. But he is still only one man and one voice in a big city. Photograph: Ryan Byrne/Inpho

Here they come. Dublin’s history boys are 1/100 to start the journey towards a fifth consecutive All-Ireland senior football title – and a lone star place in Irish culture – with that thing which has become second nature to them: a win.

A path that may ultimately lead to Croke Park on September 1st begins in Portlaoise tonight, the town busy with sky-blue shirts in hours before throw-in, the radio airwaves crackling with anticipation, O’Moore Park looking her best and, just after 7pm, the assumed stampede of Dublin excellence.

Louth, operating under the first-year stewardship of Wayne Kierans, have had a promising year so far, pushing hard for promotion from Division Three along with a head of steam for this match.

You can bank on them being well-conditioned and organised and clear in what they what to do if they are to live with Dublin’s fast-paced, relentless game plan based on precision, possession and overall superior pace and athleticism.

But short of the Dublin back line suffering from some kind of collective breakdown and shooting own goals, it’s impossible to see how Louth are supposed to respond to the velocity and accuracy of Dublin’s attacks.

The general presumption – and one which Jim Gavin understandably loathes – is that the Leinster SF Championship is a done deal – that if Meath or Kildare can “put it up” to the eight-in-a-row provincial champions then it will be a good year for the roses.

But the fascination lies in observing this championship through wide lens. In a way there are two contests going on, which will become more narrow and concentrated as the Irish summer yellows and deepens into those weeks of 30 degree heat and failed barbecues which we all demand and expect.

There will be the quickening momentum of the other counties deemed best equipped to unseat the champions during the knock-out stages of the summer. It was something that Gavin recognised during the week when he spoke about what rival teams had done during a league when Dublin had faltered at times, losing to Monaghan, to Kerry, to Tyrone.

“From Kerry blazing a trail, to Tyrone playing a more offensive attacking game, to the consistency of Mayo being deservedly National Football League winners for 2019: those things are outside of my control. All I can do is focus on the Dublin football team, and get us to be our best.”

Those things are out of his control and he was not responsible for them except insofar that they have all come as a response to the standards Dublin have set since their last championship defeat in the increasingly distant August of 2014.

By setting their pace of furious beauty and infinite patience Dublin demanded the other strongest counties become better. And they have done. Sooner or later this year’s All-Ireland will confirm whether or not those improvements are enough.

That is the immediate contest. But it is set against the colour-saturated backdrop of another celebrated era: of Kevin Heffernan’s Dublin, of Mick O’Dwyer’s Kerry and of the burning question as to whether the Dublin vintage of 2019 can go one game better than the Kerry vintage of 1982.

It was poignant that Eugene McGee, the newspaperman and architect of Offaly’s immortal All-Ireland final victory in 1982 against Kerry’s manifest destiny, passed away on the very day that this year’s sprawling championship began in London and New York.

In his final interview, with Frank Roche just weeks before, McGee gave a tentative nod to the prospect of Dublin breaking through that barrier, but cautioned that if he was in Jim Gavin’s shoes then he would be worried.

It is easy to see why. Yet again Gavin has to ward against the national assumption that Dublin will reach the same performance levels as previous years.

Since the league they have lost one of their most decorated and experienced players, Paul Flynn, to retirement. With his disappearance and Diarmuid Connolly’s apparent preference not to play county ball comes the sense that the Dublin reserves bench is not quite as stacked with experience and variety as it was in previous years.

And the closer they move towards that defining game, the higher the wire on which they walk becomes.

Gavin’s calmness and measured tone has been a vital bulwark against hysteria and getting-ahead-of-oneself. But he is still only one man and one voice in a big city. It may not be until the dog days of August, with the water restrictions and the shortening evenings, but the hysteria will come.

That’s why this is a good place to start for Gavin and Dublin: outside the capital, on a busy weekend of GAA championship games: just another team among hopeful teams, for one evening anyway.

Rory McIlroy makes a slick start to 2020 with opening 67 22:19
Wolves left to rue profligacy as Liverpool roll on 22:13
Annalise Murphy is runner-up in Melbourne as Round Ireland race takes shape 22:11
Mixed fortunes for Meadow and Maguire on LPGA seasonal bow 20:20
Kellie Harrington guaranteed a medal on her Bulgarian return 19:21
Here is your handy guide to sport on television this week