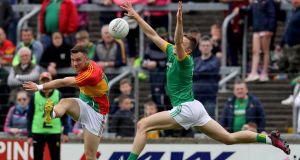 Two quick-fire goals in the second quarter ended any slim hopes Carlow had of upsetting the odds in the Leinster SFC quarter final at O’Moore Park, Portlaoise on Saturday evening.

After making a slow start to proceedings during which they conceded the opening four points, Carlow showed great heart to notch up four successive points of their own to draw level by the 24th minute.

However, their challenge imploded after that as the Royals turned up the heat while the Barrowsiders pressed the self-destruct button too often to have any real chance.

A move involving Bryan McMahon and Donal Keogan sliced open the Carlow cover and Mickey Newman had the easy task of finding the net from close range on 29 minutes.

Meath hit a second goal three minutes later and this time it was wing back Padraic Harnan who slapped to the net with Keogan again the provider.

Newman, with his second point, added to the Meath tally to leave them with a comfortable 2-7 to 0-4 lead at half-time.

Carlow, who were without manager Turlough O’Brien, coach Stephen Poacher and midfielder Brendan Murphy, all suspended, suffered another blow when ace attacker Paul Broderick had to leave the action with an injury after just 14 minutes.

It didn’t get any better throughout the second half for last year’s semi-finalists who were reduced to 14 when midfielder Seán Murphy was red carded following an incident with Donal Keogan on 49 minutes.

Three minutes later Daniel St Ledger received a black card and second midfielder Eoghan Ruth suffered a similar fate following a foul on Graham Reilly who resulted in a penalty for the Royals.

Newman was denied a second goal from the spot kick with Carlow goalkeeper Robert Sansom diving to his right to make a fine save.

Meath, though, could afford that miss and they had matters all their own way throughout that second half.

They stretched their lead on the restart following further points from Newman and Shane Gallagher. Opening half substitute Diarmuid Walshe accounted for three of Carlow’s second-half scores and the closest they went to finding the net was from a Brendan Kavanagh effort but Meath goalkeeper Andy Colgan proved equal to the shot.

Newman took his tally to 1-6 for Andy McEntee’s side before the finish. Substitutes also made an impact for the Meath men with youngster James Conlon knocking over three points in a six-minute spell near the finish.

Veteran Graham Reilly also hinted that he still has a role to play and he hit over two points after coming off the bench.