Tyrone show Antrim no sympathy in most facile of wins

Of their first five points here, four of them came from a long ball to Cathal McShane 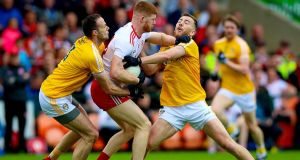 Fourteen points in it at the end, but it was only down to Tyrone’s mercy in this most facile of wins for last year’s All-Ireland finalists.

The concern for Antrim was writ large this week. After they failed to make a proper fist of a promotion charge out of Division Four, 10 players abandoned the panel. Not withstanding the five Championship debutants they played here, four players on the substitutes bench had been brought in over the last few weeks and indeed, three of them were injured and couldn’t play even if they wanted.

Laments for their lack of a home, with Casement Park in ruins, were commonplace. They are certainly victims of circumstance and politicking.

Not that they were going to get sympathy from Tyrone. In a panel where Lee Brennan and Ronan O’Neill were forced to depart due to a lack of gametime, they have a squad light years away from Antrim in physical development and desire for gametime.

Changing up their approach has also helped enormously. Of their first five points here, four of them came from a long ball delivered to their targetman Cathal McShane.

Although they profited from acres of space, Donnelly brothers Matthew and Richard arrowed over three points each and the floodgates looked set to open entirely after Peter Harte danced his way through the middle of Antrim’s defence without a finger being laid on him before dishing off to Tiernan McCann to slam to the net.

By half-time, Tyrone were 1-16 to 0-5 in front, leaving manager Mickey Harte having to improvise at the break.

“The longer they stayed in the game, the more oxygen it was giving them to believe they could cause an upset,” he said.

“Really, the goal was a big score for us because you can get as many points as you want but they were picking off a few themselves.

“The goal gave us a bit of daylight first of all, then we pushed on a few more scores. It was where we wanted to be at half-time and we were looking for a good performance from ourselves for that to happen.”

In the 42nd minute he made three attacking substitutions, sparing Antrim somewhat, but the three subs contributed 1-4 in the remainder of the game.

Antrim sneaked through the covers to grab two goals of their own from corner back Paddy McCormick and Matthew Fitzpatrick, but only for a severe tailing off, Tyrone could have been twenty points better off.