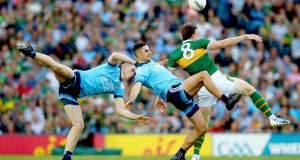 As if to honour the occasion, Dublin completed their five-in-a-row ascent on history with the county’s best display in an All-Ireland final in this decade of decades.

It didn’t quite come out of the blue because Kerry were so accomplished in a spell-binding first half and so determined not to let go in the third quarter that the champions needed nearly every shot in their locker to press home an advantage that grew to commanding proportions as the young challengers faded.

On an objective basis, it wasn’t until the 44th minute that Dublin registered a first wide (allowing that three dropped short before half-time) and they must have made some sort of history by being the first winners not to require a converted free as part of their winning total; if so, that was an unintended landmark, as they weren’t terribly happy with Conor Lane’s refusal to penalise the Kerry defence on a couple of occasions in the first half.

Then again, swings and roundabouts. The exhilarating goal buried by Eoin Murchan – a late call-up for Michael Macauley – directly from the second-half throw-in featured more steps than a Roman tourist attraction although to be fair, the attendant fouling prevented any soloing.

On a lovely September Saturday evening with the floodlights diffusing into the dusk both teams came with something different than in the drawn match. The most important thing Dublin brought was a full complement, having survived Jonny Cooper’s red card in the first half of the previous encounter.

It enabled them to find their rhythm more easily and that told at various stages with Dublin able to anaesthetise the match by playing long phases – one of nearly three minutes – of keep-ball.

As if often the case, the texture of the replay was different. Standout performers lapsed a little and the previously subdued stepped forward. For Dublin this applied most obviously to Jack McCaffrey, who had ripped Kerry asunder the first day but who found space greatly restricted this time and tumbled out at half-time with a leg injury.

This potentially worrying turn of events was ameliorated by Murchan’s embrace of the Billy Whizz role on the resumption.

The teams also decided to duke it out rather than execute those high-wire presses on the kick-outs. It was as if Kerry had been emboldened by how close they came on the first day and decided they no longer needed such steep risk-reward ratios.

The problem for them was that with the damped-down risk, reward was harder come by and the tactical decision to launch an early bombardment ended as that strategy has so often against the Dublin full-back line’s supposed aerial vulnerability – in a series of fisted clearances and snappy responses to the breaks.

Direct running, especially on the counter, caused more problems and as in the drawn match, Kerry got chances. Paul Geaney, who combined his excellent distribution with some sharp shooting, will have been disappointed to see his 12th-minute point blaze over rather than under the bar.

With possession guaranteed – only two re-starts were lost all evening, both by the otherwise imperious Stephen Cluxton – it became an evening for gunslingers. Con O’Callaghan was in, in less than 20 seconds. He, Paul Mannion and Ciarán Kilkenny managed just three from play the first day; this time they quadrupled that.

What made the first half so compelling was that Kerry’s marksmen were also on target. David Clifford was again operating on high voltage even if Mick Fitzsimons bravely insulated himself to try and again deal with the issue. At one point, a Cuala double-teaming which fouled Clifford led to Fitzsimons being apparently black-carded.

The clarification that it was a ticking ignored the fact that O’Callaghan had committed the infraction. Seán O’Shea, quieter this time, kicked the free.

But Clifford and Geaney had six bagged from play by the break.

Having weathered a 0-1 to 0-5 deficit within the opening 10 minutes, they picked it back and looked the team with momentum at half-time, having drawn level at 0-10 each.

Diarmuid Connolly’s emergence in place of McCaffrey for the second half was a telling statement about how the prodigal’s potential is viewed by Jim Gavin. But it was a curate’s egg – some typically sublime touches but others that showed a lengthy absence from intercounty activity isn’t easily borne.

Kerry again were resilient. Their difficulty was that the goal had left them chasing the match. A commendable response of three unanswered and brilliant points from Clifford, Geaney and O’Shea just brought the margin back to one, instead of setting more of a challenge for Dublin.

The final quarter began with Stephen O’Brien shooting a bit too close to Cluxton, who blocked the shot – which would have levelled the match – to the voluble delight of the Hill, whose raucous presence was acknowledged afterwards by Gavin.

The drift of the match by the end was very much on Dublin’s terms: seeping bouts of keep-ball and the incisions they couldn’t find in the drawn match. By the end there was a procession from the bench of the players who had made the decade possible: on the field from Pat Gilroy’s pioneers of 2011 were Cluxton, Fitzsimons, McCarthy and subs Connolly, O’Sullivan, McManamon and McMahon.

The five-in-a-row shimmered into reality, as from Kerry’s bench, Tommy Walsh and Killian Spillane were unable to exert the influence of two weeks previously. The last transaction was Dublin’s first placed-ball score – a 45 from Dean Rock after Connolly and O’Callaghan had been denied by a double save from Shane Ryan.

Gavin and his management gave no inkling of their plans but there was a feeling of elegy about the occasion. Gavin was unusually animated and in the ear of lineman David Coldrick in the first half but otherwise his team calmly negotiated the pitfalls of an achievement beyond a number of great teams in the 135-year history of the GAA.

Kerry will be back but it was Dublin’s day, their year and their decade.