Kerry aiming to show their title credentials on the big stage 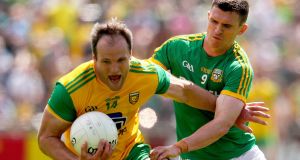 Michael Murphy in action against Meath’s Shane McEntee. Murphy will make his 150th appearance in a Donegal shirt when he lines out against Kerry at Croke Park. Photograph: Oisín Keniry/Inpho

Moving day in the Super 8s of the football championship.

Two of them in fact, back-to-back, both in Croke Park. By tonight, we’ll know whether or not Dublin and Tyrone have reduced Group One to Dead Rubber Central.

By tomorrow, we’ll have a better idea of whether anyone can separate themselves from the rest in Group One. The lads above in Portrush aren’t the only ones jostling for position ahead of the final push.

Tie of the weekend? Probably Kerry v Donegal, although the others retain various levels of charm. The loss of Eoin Bán Gallagher to a broken ankle is brutal for Donegal, not just for this weekend but presumably for the rest of the summer.

It was looking likely that he’d have been posted on Stephen O’Brien for the afternoon and without that spectacle, the game is ever so slightly diminished. But we’ve enough to look out for elsewhere to keep us going.

For Donegal, a face-off with Kerry feels like an appropriate way to mark a couple of milestones. It will be Michael Murphy’s 150th game in a Donegal shirt. It will be Patrick McBrearty’s 50th championship outing. Donegal’s flourishing in the past couple of seasons under Declan Bonner has lifted some of the weight off their shoulders but let’s not overstate it, either. Both of them will be needed.

For Kerry, the tide from last week’s blitzing of Mayo has to be taken at the flood. That Peter Keane’s young side is coming is obvious to everyone. But between defeats in the league and last year’s Super 8 loss to Galway, a lot of them have to go back to their underage days for the last time they won in Croke Park.

David Clifford and Seán O’Shea have been there three times as senior footballers and came away beaten on each occasion. It’s not a problem yet, but it’s best dealt with before it becomes one.

If the winner of that one will be set fair for a semi-final place, the loser of the game that precedes it tomorrow will be all but done for the year. Mayo and Meath won’t be mathematically eliminated with a defeat but there’s bound to be a certain crushing feeling involved. Both will play their final round game at home in a fortnight. Funeral or festival – tomorrow will decide.

If tonight’s games in Group Two feel a little lower on the bill, it’s really only as a consequence of the shadow cast by Dublin’s excellence. Croke Park days like this are routine for them – unfairly so, for a lot of people but sin scéal eile. They are unbeaten in their last 32 championship games and will presumably put Roscommon through the mincer tonight to make it 33. Immortality gets a weekend closer.

The first game today will surely hold the attention for longer. Tyrone and Cork haven’t met in the championship for a decade – the last time they did, Tyrone were All-Ireland champions and they lost to a Cork side that would scale the mountain themselves a year later.

Now they come to Croke Park at different points in their life cycle but both feeling they are headed in the right direction.

Cork will feel their second trip to Croke Park in a week will have to be successful if they’re to get the full benefit from their good showing in the first one. Tyrone will know that they need to keep expanding the breadth of their ambition if they’re to survive the bigger bouts that lie ahead. Neither will be cowed by the other, even though they’d do well to take them seriously. The makings of a lively encounter all round, so.

The football year has four weekends left in it. What happens in this one will dictate the course of the others.