Donegal and Monaghan draw the worst out of each other again 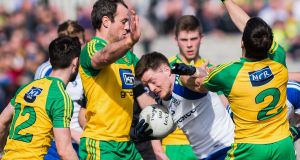 What did you expect? Yes, the sun shone in Ballyshannon and it was Mother’s Day and the world seemed in good mood. But when Donegal and Monaghan get together, it’s like two brothers sitting down for a big night in the pub. It starts off with good intentions but sooner or later they bring out the worst in each other.

Insofar as this game is remembered at all, it will be for Monaghan’s delightful capacity to find new ways to aggravate the Donegal men. Rory Gallagher’s players weren’t flawless here; they were laborious on the ball and fired 15 wides over their afternoon in Fr Tierney Park. But they dominated possession and had made it appear as if Michael Carroll’s first-half goal would be the difference between the teams when it ended.

Still, they were foolish enough to leave the Farney men just a glimmer. They should know by now what Malachy O’Rourke’s men do with glimmers. A lighting raid down Donegal’s right wing, a hopeful ball fisted into the area, a drag back on Kieran Hughes by Martin McElhinney and the sharp whistle of a penalty. That, as they say around Newbliss, will learn ya.

Conor McManus, who had been shepherded into anonymity by Paddy McGrath, stepped up and duly accepted the goal. All square and the only surprise was that Monaghan didn’t have the impudence to go and win the thing entirely.

Gallagher considered for a moment when asked if the absence of Ryan McHugh, who had been carried off after 60 minutes with a bad ankle injury, had cost Donegal in the concession of that penalty.

“Possibly. That’s the wing he defends. But we can’t depend on any one player. It came from a long kick out that we should have got our hands on and we just didn’t defend the whole situation well enough.”

Donegal’s seventh-minute goal came from their slick, penetrating running game, with Eoghan Ban Gallagher providing the source material and putting Michael Carroll through, who finished confidently. As it turned out, it was a goal they needed. Donegal kicked six wides into a tricky breeze and after Michael Murphy kicked a wonderful point in the 11th minute, they had to wait until the 35th until their next score from play.

By then, Jack McCarron had emerged as the chief tormenter for Monaghan at the other end of the field. He suckered Neil McGee into an early free for fouling and had the speed and physique to cause trouble for the remainder of the half, landing two brilliant points from play as well as well as saddling McGee with a yellow card for his attentions in the 35th minute.

Ciaran Gillespie was introduced in the second half and promptly set the tone by winning a fine ball and bursting forward. McCarron was quiet thereafter. Consequently, Monaghan’s scoring dried up all together: they managed just 0-2 over the half until McManus’s jolt from the penalty spot.

“In the first half, Jack got a number of quality scores. Conor, I suppose, gets a lot of attention and there were times today when the ball didn’t bounce for him,” said O’Rourke.

“He worked hard but didn’t get into the game as much as he would have liked, with the wind it was hard to get the ball into our inside forwards. But we know that Conor doesn’t shirk anything and he kept going right to the end, I thought he showed great leadership to stand up and dispatch the penalty emphatically.”

Donegal had only themselves to blame for not being out of sight. Their younger players learned things here. It hurts to play Monaghan. If you carry the ball into the Monaghan defence and then pull up, you will lose the ball. Always.

The defensive work of Karl O’Connell, the aptly name Wylie boys and Gavin Doogan was first rate. And Monaghan do not quit against Donegal. Ever.

True, the 0-6 they fired in the second half contained a few beauties, including two from play by Patrick McBrearty. Murphy also contributed his first scores from play in this league, a statistic which further emphasises just how different his role is now from his original appearance as a barnstorming full forward. Both Murphy and McBrearty had snap-chances to win it but could not convert. Stalemate, so, in every possible sense. The crowd of 6,575 peeled away singing ‘We’ll Meet Again’.

Leinster made to work hard to maintain 100 per cent record 01:13
Corofin and Ballyhale frank their greatness at headquarters 01:03
Minella Till Dawn favourite to bridge long Thyestes gap for JP McManus 01:00
Sibling rivalry driving younger Ulster Burns to aim for next level 01:00
Future of Tote Ireland set to be decided by end of March 01:00
Crossword Get access to over 6,000 interactive crosswords