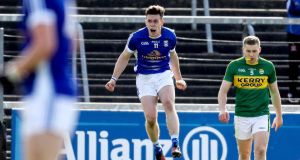 Usually when you’re left fighting for scraps that’s all you get, although Kerry helped make it a slightly more satisfying afternoon for Cavan by inviting them to a share of the crumbs from their own table.

Because for the second weekend in succession, Kerry were two points up approaching added time, only to let that advantage slip – Seanie Johnston’s coolly struck free levelling it up for Cavan to the not unjustified roar of the home support.

Unlike against Dublin last weekend, however, Kerry did have one last shot at redemption, only for Paul Geaney to strike his late free wide, to the groans of their supporters. That wasn’t unjustified either as Kerry ended with 13 wides, eight in the second half, each one as unforgivable as the next.

“Of course it’s frustrating,” said Eamonn Fitzmaurice, the Kerry manager already thinking to next Sunday’s final round showdown against Tyrone, still not sure of their Division One status for another year.

“And I’m sure the lads are frustrated as well. We had been going well the last number of weeks, came close to winning last weekend, and you’d like to see that graph continue upwards. But the big thing from our point of view is that we didn’t lose the game. And Cavan to their credit did make it very hard on us.”

On balance Cavan possibly played the better football, especially in the second half, Dara McVeety’s beautifully struck goal on 41 minutes pushing them a point in front, forcing Kerry to counter-attack. Kerry gradually clawed ahead, Barry John Keane impressing most of the bench, although with Bryan Sheehan repeatedly off target as well they could never open any daylight.

“I just didn’t think our handling was good enough,” added Fitzmaurice. “Our decision making was off. And there was an awkward breeze which affected the team’s shooting at different times. But I think we’d have lost that game a couple of years ago, so I’m glad to have got the point.”

Mayo’s win over Tyrone hasn’t helped Cavan’s chances of staying in Division One, but they go into the last round against Roscommon with at least something left to fight for, and for manager Mattie McGleenan that’s good enough for now.

“I thought it was a fabulous football match, we showed again that we can compete at this level. I don’t care what anybody says, they may not have won the game, but they fought for it right until the end.

“And I’m delighted with the attitude, because that’s the main objective, to compete week in, week out. And it was another fantastic learning curve for us to take into the championship. We have to prepare for Roscommon now, and see where that leaves us.”

Conor Moynagh also scored late on to set up Johnston’s equaliser, and Gearoid McKiernan had a fine game at midfield, Jack Barry not quite at the same heights he hit against Dublin last weekend.

A better first half and Cavan might well have won: instead, aided by the warm spring breeze, they slowly reduced themselves to some repeatedly poor shot selection, and finished that half with 10 wides.

Kerry didn’t score from play until the 20th minute, thanks to Donnchadh Walsh, the only starting forward to do so. Geaney still finished with five frees, but closer to goal, Kerry’s threat was completely absent.

Fitzmaurice does have club and under-21 players to come back, although not necessarily Colm “Gooch” Cooper, with the manager suggesting the decision on his future could well go either way.

“We’d a chat last week, but didn’t come to any decision. I wanted to give him a bit more time. It’s still so close to the Dr Crokes’ victory, he’s still mulling it over. Colm is around the game long enough and will make the right decision for himself, and that’s the way it has to be.

“Of course we want to see him back, but you can’t strong-arm a fella into that position, especially someone who’s been such an incredible servant to Kerry. I laid my cards on the table, and he did likewise, and we’ll give him the space to think.”

With Tyrone coming to Killarney next Sunday, at least Kerry won’t need incentive to pick it up again: “I think it’s in double figures, the number of players making their first start,” added Fitzmaurice, “and the lads are saying how much you have to be on your game every week to compete at this level. And that’s a great learning curve.”