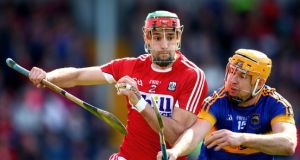 Cork inflicted a first defeat of the season on All-Ireland champions Tipperary in a pulsating league encounter at Pairc Ui Rinn on Sunday.

A shirt-sleeved crowd of 8,376 witnessed a truly epic contest with Cork showing great courage against the strong wind in the second-half after falling behind.

Patrick Horgan emerged as the hero with his winning point-his 15th in all-coming 20 seconds from the end of four minutes added on for injuries just moments after Tipp substitute Ronan Maher cut a delightful sideline point from half-way.

Horgan wasn’t named in the starting line-up but replaced the injured Shane Kingston before the start and underlined his importance to the cause with his brilliant marksmanship.

Cork were also forced into replacing centre-forward Conor Lehane, who limped out of the action after only six minutes.

Darragh Fitzgibbon deputised in a reshaped half-forward line and proceeded to give rookie wing-back Willie Ryan a difficult time with his scorching pace and impressive accuracy. Fitzgibbon pilfered five points in all.

Tipp started with seven members of their All-Ireland winning team including goalkeeper Darren Gleeson, making his first appearance of the season.

And the McCarthy Cup holders would have fancied their chances of preserving their unbeaten record after scoring six points in-a-row during the third quarter to sweep 2-14 to 0-18 clear.

Defiant Cork, though, kept battling and were in front once more by three points approaching the end of regulation time until Tipp struck for their third goal.

A dangerous ball into the goalmouth ended with Seamus Callanan kicking it high into the net to restore parity only for Horgan to claim the winner.

In the first-half Cork enjoyed a six-point advantage, 0-12 to 0-6, and were full value for their lead. They hounded Tipp in the middle third where Dean Brosnan and Mark Coleman played an amount of ball.

And while 14 points would normally be considered a useful return in a half’s hurling, the fact that Cork also registered a dozen wides in the period seriously impacted on their chances of building a substantial lead to act as a buffer on the resumption.

Tipp made them pay for their wayward shooting by grabbing a pair of crucial goals in four minutes approaching the interval.

That cut Cork’s lead to 0-12 to 1-6, but worse was to come two minutes into injury-time. A probing ball from Dan McCormack wasn’t dealt with by the Cork defence, allowing John McGrath belt in goal number two.

Fitzgibbon completed the scoring with his third point, but their 0-14 to 2-6 advantage hardly looked that imposing a challenge for the All-Ireland champions.

Cork declared their intent within 20 seconds of the resumption with a Seamus Harnedy point though keeper Anthony Nash redeemed himself after a loose clearance by getting his body behind a stinging Tommy Heffernan shot.

Alan Cadogan set-up Fitzgibbon for another and when Horgan pointed a free after 42 minutes Cork stretched their lead to 0-17 to 2-6, but Tipp then got on top.

Substitute Noel McGrath and captain Padraic Maher fired over inspirational points during their purple patch to seemingly send them on their way to victory only for Cork to have other ideas.

Guardiola’s City legacy hinges on Europe as he faces old foe 05:00
Munster were fever-tested when they arrived in Italy 01:00
Crunch time for Connacht as they chase Pro14 dream to South Africa 01:00
Pep Guardiola believes Man City deserve some luck in Europe 22:30
Barcelona nab away goal after going behind in Naples 22:19
Crossword Get access to over 6,000 interactive crosswords