Kildare pip Clare to earn promotion to Division One 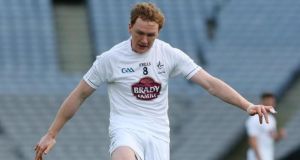 Kildare coach Ronan Sweeney hailed the manner in which his players reacted to a potentially disastrous situation to chisel out the victory that secured the Lilies a second successive promotion and a place back in Division 1 for the first time since 2014.

With the hugely influential Kevin Feely black carded and Clare having turned a five-point interval deficit into a two-point lead in the final quarter, despite playing into a strong wind, serious questions were being asked and Sweeney was delighted with the answers.

“Clare were brilliant I thought” said Sweeney. “They hit harder than any other team we played so far this season. It’s great to be able to take those hits and come out with the win.

“I think a couple of fellas really stood up there at the end when we really needed them. That’s a good sign as I think players are growing as the season is going on. We really needed fellas to stand up today and become leaders and they did that.”

Top of the list in that regard was match-winner Paul Cribbin, with the former AFL man slotting three points in the game’s defining period, including the 70th minute match winner, having started that move himself.

Clare had the chance to snatch a share of the spoils but Eoin Cleary, who had scored some wonderful points in his tally of seven, dragged his kick wide from a 35m free in injury time.

A 42nd minute goal by the outstanding Shane Brennan was a key score but Kildare had received plenty of warning, with Brennan having struck the butt of the post in the first half while Clare got through the middle of the home defence on at least three other occasions.

And just three minutes after the goal, Brennan was through one-on-one but Mark Donnellan came up with a big save.

A repeat of last year’s Division 3 final, when Colm Collins’ men got the better of the Lilywhites, looked very likely when Brennan, Cleary and Jamie Malone raised white flags to make it 1-12 to 0-13.

Kildare lost David Slattery and Feely in the space of two minutes and Feely’s loss was considerable, as the Athy giant had claimed marks, distributed astutely and continued the impressive free-taking with either foot that was a feature of the previous week’s win over Down.

Cian O’Neill will have been delighted with the manner in which his charges stemmed the tide and found a way to solve problems.

Cribbin showed real leadership, carrying with purpose and taking on responsibility. His first point was a peach and Kildare got themselves ahead twice but Cleary angled shots over from tight on the left, with his left boot, and no-one would have argued had the Munster men gone away from Newbridge with a draw.

But with time running out, Cribbin drove forward from the middle, beating three players before offloading to Ollie Lyons. And with Ben McCormack looking for an option, it was the Johnstownbridge star who was available, taking possession and finishing coolly.

Dan Tuohy explains ‘rotten to the core’ comments 18:08
Serie A matches to be played behind closed doors due to coronavirus 17:54
Sam Bennett sprints to second in stage two of the UAE Tour 15:55
Northern Irish FA ban children aged 12 and under from heading footballs 15:18
Panorama show Mo Farah changed account to anti-doping investigators 14:41
Crossword Get access to over 6,000 interactive crosswords