Galway ease past Down to maintain Division Two title push 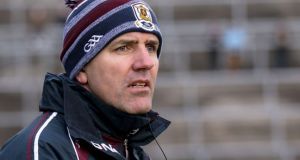 Kavin Walsh’s Galway eased past Down despite being reduced to 14-men. Photograph: Mike Shaughnessey/Inpho

Three second half goals proved enough for 14-man Galway to notched another win in Division 2 and maintain their hopes of winning the league after they comfortably ousted Down in the end at Pairc Esler.

With the sides locked at eight points apiece at half-time, Kevin Walsh’s side took the tie by the scruff of the neck on 39 minutes when Eamonn Brannigan tucked away a penalty past substitute Down ‘keeper Marc Reid after Michael Cunningham had brought down Gary Sice.

Then just 60 seconds later, they made it 2-8 to 0-8 when the impressive Shane Walsh lashed to the net. While Galway did have Declan Kyne shown a straight red card for striking Barry O’Hagan off the ball before the Down man hit goal for the hosts.

A great save from Rory Lavelle denied Ryan Johnston a second home goal soon after but following that the Tribesmen began to pull away, with Brannigan notching his second goal after he fired in from the rebound off his second penalty that had initially been saved by Reid.

It means that Down will need a result next week away to Cork to maintain Division 2 status for 2018 after Eamonn Burns’ men fell to their fourth defeat in this year’s competition and their third at home.