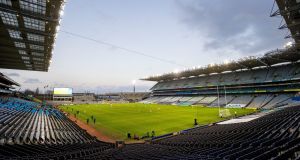 The All-Ireland finals will take place on July 18th and 25th at Croke Park in 2021. Photograph: Tom Honan

After confirming their master fixture plan for 2021, the GAA now need a plan for how they’re going to pay for it all, and the first port of call will again be the Government.

The new streamlined and entirely split season for 2021 will see all intercounty taking place first, before the exclusive club window opens, with a return of the All-Ireland club finals in January of 2022, and Croke Park’s director of games administration Feargal McGill admitted all that brings fresh financial challenges.

County treasurers have already been informed that due to limited cash flow, it could be April 2021 before all expenses of the past year can be met. With no guarantee of any major gate receipts in 2021 either, Government assistance may prove vital.

“There are financial challenges there, no doubt about that,” said McGill. “I suppose this was approved with an asterisk, from our finance committee, etc. We do have to go away and then come back with a plan for how all of these will be paid for.

“Because obviously we’re proceeding on the basis that we won’t have attendances, and attendances are still the key financial driver for the GAA. So there’s a job of work to be done there, and that’s to be discussed at the January Central Council meeting.”

Back in April, when it seemed there was little prospect of the championship being completed before the end of 2020, director general Tom Ryan estimated the potential cost of losing the championship could be in the region of €60 million, which would represent nearly the entire revenue of €73 million from 2019.

The GAA is still facing an overall loss of revenue of about €50 million in 2020, even after the Government pledged an extra €15 million to run championships, with the distribution of the €40 million to the three main sports organisations - the GAA, FAI and IRFU – likely to bring in another €15 million

For now then there is the assumption some Government grant will be required to fill the financial hole in 2021.

“It would be certainly be very helpful,” said McGill. “Look, we will find a way, as we always have, of financing the competitions. It would be terrific if the Government helped us again, but we’ll just have to wait and see. We haven’t had those conversations, yet, and obviously everyone in sport is looking for Government help, not just the GAA at the moment, but down the road I’ve do doubt that conversations will take place.”

Starting the county fixtures first was a “no-brainer” said McGill, in part because under Level 3, there can be no club games. “That’s unlikely to change in the first quarter, so that would mean looking at no activity at all, in the first quarter of the year.”

The football and hurling leagues are pencilled in for a start date of the weekend of February 27th-28th before the championship begins on April 17th-18th with the All-Ireland senior hurling final on July 11th and the football final a week later on July 18th. The exclusive club window is then set to begin a week later.

Congress will also decide if the Super 8s will resume again post-2021, as part of the future football championship. As agreed by Central Council at the weekend, the new season will start on the last weekend of February with the Allianz Football League organised on a regional basis, but within the same divisional structure. The Allianz Hurling League top flight will be run as before, only the top team in 1A and 1B will face-off in the final.

Asked about the possibility of getting supporters back in 2021, McGill said: “That’s completely out of our hands, to be honest. We’d love to give you some positive news, it’s just a case of wait and see, but I think with vaccines and everything else, we have to be a little bit optimistic that some supporters will get back in 2021.

“That also feeds into the question around county versus club first, and if we’d looked at this purely from a financial basis, we’d probably have run with club first, in the hope that towards the end of next year attendances might be back. But that would have been short-sighted, and not in the best interest of 450,000 club players. They have to be our priority.”

Collective senior intercounty training is officially permitted from January 15th, and the 2021 championship draw will also be made in January.

In football, the league will be initially played out as follows

There will be All-Ireland qualifiers to allow for second chances, as opposed to this year’s purely knock-out format, used for the first time in 20 years.

No return to collective senior intercounty training before January 15th

Run on same basis as in a normal year (Div 1A, 1B, 2A, 2B, 3A, 3B) except no league quarter- or semi finals – Division 1 league final will be Div 1A winners v Div 1B winners; top two teams in all other groups play the relevant league final.

There will be 11 teams in the Liam Mac Carthy in 2021 – there will be a preliminary round in the qualifiers between the two defeated quarter-final teams.