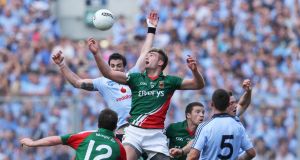 In a fast crowded decade, it is the game that has somehow fallen through time.

Nobody talks about Mayo-Dublin 2012, which is a shame. It was significant in a number of ways. To begin with, the day stands as Mayo’s lone championship win over Dublin in this hectic rivalry.

And it was the very last time that the country would see Old Dublin on display – the hard-charging, unpredictable bunch of individualists sucking in the butane fumes drifting in from the Hill and riding that wave of energy, sometimes brilliantly, sometimes foolishly.

It was August 4th and sunny and the economy was rolling along. Life was good and the mood buoyant. But what was unfolding on the field was startling. After 50 minutes of play, Mayo led Dublin by (rub your eyes) 0-17 to 0-7 and right around then Jason Doherty hit a piledriver just right of Stephen Cluxton’s posts; a goal at that stage would have left the city team in an embarrassing place. And most importantly, it was a riotous game of football. The key line in Sean Moran’s match report contains all you need to know.

It’s almost poignant looking at it from the perspective of early Christmas 2020, knowing what the coming decade would hold for the players on both teams. Dublin, in particular, were playing a game that would be alien to the current crop – spontaneous and largely instinctive; a patchwork littered with the untidy edges that Jim Gavin would fastidiously trim out of existence over the following seven years.

Influences peaked and waned. In the first 40 minutes, Barry Moran was a beanpole colossus at midfield. And then, as Dublin got their act together, Michael Daragh Macauley became the pre-eminent performer.

This was during the period when Macauley was a novelty in Gaelic football; a hyper athlete plucked from the city’s basketball courts and rampaging through centrefield, arms flailing and legs akimbo so the crowd was never quite sure whether he was about to lose or had just then regained control of the ball. Whatever, it worked.

Mayo were cold outsiders that day. They had lost their totemic forward Andy Moran with a serious knee injury in the quarter final, when they stung Down for a whopping 3-18. Worse, their dynamic young defender Lee Keegan went down after 20 minutes, holding aloft a dislocated finger that had achieved Nixonian levels of crookedness.

It was also the afternoon when Dublin got its first proper look at the influence Ciarán Kilkenny would have over the decade. And Dublin-Mayo 2012 may contain the last recorded use of the marvellous GAA word, “the melee” which went the way of the corncrake during the Celtic Tiger.

Darragh Moloney rightly used it to describe the agro that broke out just before half-time, when Enda Varley unwisely decided to launch himself at Philly McMahon and found his nose connecting with the Dublin defender’s elbow. Philly trotted away like a lad on his way up the aisle to receive first communion.

Rory O’Carroll attempted to drag the prone Varley up off the grass. He was in turn bowled over by Cillian O’Connor. After an inordinate delay, a vexed James McCarthy and Kevin McLoughlin were booked, possibly for being the best players on the field. The stadium dial was turned to 11. And the mood was anarchic.

To source the origins of that game, you have to scroll back to two summers earlier. In the summer of 2010, neither Dublin nor Mayo were regarded as serious players at the big table. Dublin had been dumped out of the 2010 Leinster championship by Meath, losing 5-08 to 0-13.

Significantly, they were not dumped out of Croke Park. Tipperary, Armagh (0-14 to 0-11) and Louth were served up in headquarters as they got their campaign back on track ahead of a revivifying quarter-final win over Tyrone. They exited at the All-Ireland semi-final with a one-point defeat to Cork, who went on to win the All-Ireland.

It was quintessential Dublin: loud, colourful, fairly close to being the real thing on paper but ultimately very far away. The experience deepened Pat Gilroy’s determination to make a bonfire of Dublin’s shortcomings and conceits. It was a year after the “startled earwigs” experience against Kerry. The dawn purges had already begun and over the following year, Gilroy would begin to enforce a pride in defensive meanness and responsibility.

The ethos of the team was already beginning to shift from the individual to the collective. And there was much goodwill. After all, Dublin hadn’t won an All-Ireland football title in 15 years. They hadn’t even made it to a final.

Mayo were truly in the doldrums after the 2010 season. After losing to Sligo in the Connacht championship, they were gone from the championship by June after losing to Longford after extra time in Pearse Park. John O’Mahony, a revered figure in Mayo football, stepped down immediately afterwards.

It wasn’t immediately evident but O’Mahony’s legacy was to coax along a cohort of players who would become vital to the Mayo cause. Andy Moran, Aidan O’Shea, Keith Higgins, Donal Vaughan, Kevin McLoughlin Chris Barrett, David Clarke, Séamus O’Shea and Alan Freeman all started against Longford.

But the departure of O’Mahony left Mayo football in a vortex. In what direction could they turn next? In a rare burst of adventurousness, the selection committee appointed James Horan, whose CV was then limited to Ballintubber.

Gaelic football was undergoing a massive and covert change that year even if nobody fully realised it. There was still a place for football like this: dodgem car chaos, with 28 outfield players tearing around the field in a world of their own, trying to make things happen. In the 53rd minute, only one Dublin player had scored in the second half. That was Stephen Cluxton, the goalkeeper, who struck two 45s.

Possibly spurred on by their fear of the wrath of post- match Gilroy or the realization that they might exit the championship as a laughing stock, the Dubs took a deep breath and defended their All-Ireland in a manner befitting them.

Suddenly, Mayo couldn’t get a hand on the ball. Suddenly, Dublin begin to purr and rattle over seven unanswered scores. The most gorgeous of these is a disguised flat hand-pass from Bernard Brogan to Paul Flynn who delivers one of those high curling shots which hangs forever over the thrilled Hill crowd. The force is with the city again.

The last ten minutes contained the essence of the All-Ireland championship. Dublin closed it to 0-17 to 0-15 after Brogan collected a long ball, delivered from a free by Kilkenny and turned to face David Clarke. Frozen, the moment was classical Mayo, who suddenly looked poised to lose a contest through which they ran rampant just 20 minutes earlier. Clarke got a strong right paw to Brogan’s shot: the rebound travelled so far that Flynn collected it at the 21 metres line and snapped it over.

But it’s telling, the cold self-assurance that would come to define Dublin teams – particularly against Mayo – in the suffocating closing minutes of big All-Ireland days was not yet present. This was still just a game of football. At the other end, Cillian O’Connor blazed a golden opportunity on goal wide and dipped his head into his hands. But Mayo finished the stronger anyway, an O’Connor free, a late point from Séamus O’Shea, sealing a 0-19 to 0-16 win.

If you had suggested that evening that Dublin would lose just one more championship game for the remainder of the decade, you would have been laughed at. And if you told Mayo people that evening what the next chunk of football summers had in store, they wouldn’t have believed it.

A few weeks later, Mayo lost their first of four All-Ireland finals within a decade. In that 2012 final they were unable to bring the same wildness with which they used to destabilise Dublin. Throughout the summer of 2012, Donegal had the conditioning and game plan and will power to impose their game on the opposition. Their success sent the game tearing in a new direction. And their success also meant that what Horan had achieved with Mayo over the same period of time was largely overlooked. Horan stepped down in 2014 but the bloody -minded conviction remained.

The significant thing is that his return as Mayo manager very much mirrors the pattern of his first term. In 2011, Mayo were ultimately torn apart by a seasoned Kerry outfit in the All-Ireland semi-final. They went away and learned and made it to the final the next year. In 2019 – the first championship summer of Horan’s second term – Mayo were infamously torn apart by Dublin in that quaking ten minute spell after half-time. They went away and learned and now, in the year 2020, are unexpectedly back in an All-Ireland final.

Stephen Cluxton, James McCarthy, Mick Fitzsimons and Kilkenny are the only starters from 2012 who will also start Saturday’s final. Mayo have undergone a radical transformation in the past year under Horan. But there is a clear link then and now through the team’s senior figures: Clarke, Aidan O’Shea, Chris Barrett, Kevin McLoughlin, Cillian O’Connor and Lee Keegan all started in 2012 and will do so on Saturday.

The echoes of that day will bounce around Croke Park on this special Christmas Saturday. All of Mayo will be watching. And if the oxygen thins out and the scoreboard stays close, it will be no surprise if Colm Boyle and Keith Higgins, two of the lionhearted defenders from Horan’s first run, are sent in to see if maybe you just can’t turn the clock back after all.