Kilkenny wear Dublin down in second half comeback 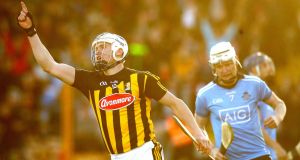 The first proper hurling match of the summer and flat out roaring already, Kilkenny producing yet another comeback act of ruthlessly familiar prowess.

They may have been lacking some first choice players, maybe even some spine, but it was same old, same old Kilkenny, wearing Dublin down with a second half grind that had Brian Cody’s 21 years of experience and coy written all over it.

It gets their Leinster hurling campaign up and winning, the desire to win the first game, at home, ultimately telling in the end.

They had to make some running repairs, trailing Dublin for much of the first half, and four points down at the break, before slowly and then very suddenly ending it as a contest - TJ Reid showing them the way with a proper captain like display that saw him finish with 2-12, including one suitably ruthless penalty strike.

It was Reid’s first goal, on 47 minutes, which first turned the game properly: a simply magnificent one-two with Colin Fennelly saw Reid hit straight past Alan Nolan in the Dublin goal, levelling the game, 1-15 apiece. Dublin briefly rallied before Kilkenny poured on the pressure all over the field, locking down Dublin in defence, while Reid continue to rattle up scores.

Fennelly also hit the net on 58 minutes, only for that to be called back for a penalty, duly converted by Reid. Now up by three, Kilkenny pressed on home without fear of being passing. For Dublin it finished up trying to limit the damage on the scoreboard, the five-point defeat a little harsh given how well they had played in the first half.

Indeed for much of that first half Dublin were giving Kilkenny a lesson in hurling, on their own home turf, and there was tension in the air. Some had questioned the Kilkenny depth, given the number of injuries, but there nothing whatsoever spineless about their performance either. Before a crowd of 9,496, they kept on going and get their just reward in the end.

They had exchanged points, twice, in the opening minutes, before Dublin stepped up a gear and put Kilkenny under considerable pressure. On nine minutes Liam Rushe, acting like a wrecking ball in front of goal, was hauled down: penalty. Sean Moran came up from centre back to drill it into the net and Dublin were up 1-3 to 0-3.

That raised the noise and the tempo around Nowlan Park, Dublin stretching it to three points on 20 minutes after Rushe brilliantly set up Danny Sutcliffe for his first. Alan Murphy and frees from Reid kept Kilkenny in touch but not for long.

Kilkenny had to settle again and briefly did, thanks two frees from Reid - the second one bizarrely interception at first by Dublin selector Greg Kennedy, who happened to be on the field, referee Cathal McAlister thus insisting it had to be retaken. We could hear from the opposite of the field the mouthful Kennedy got off Brian Cody when returning to the sideline.

Two minutes before the break Rushe played wrecking ball again and won another penalty, Moran opting to send this one over the bar. After that they broke for the half with Dublin still holding their advantage, 1-13 to 0-12,

Cody soon made some running repairs, dropping Huw Lawlor into full back, Padraig Walsk on to the wing, Richie Leahy and Richie Hogan coming off the bench: it wasn’t long until the effects were seen.

Dublin had come to town knowing a championship win over Kilkenny is a rare thing: only once in 77 years, to be exact, that being the 2013 Leinster semi-final replay; the last time Dublin beat Kilkenny before that was 1942, but the chance to make that two here proved a little beyond them in the end.

For their manager Mattie Kenny, the first taste of championship hurling was a lesson in familiarity: Kilkenny will invariably find a way back into the game, no matter what. On to round two next Sunday: The Cats head up the road to Carlow, Dublin welcome Wexford to Parnell Park. Coming on fast already.