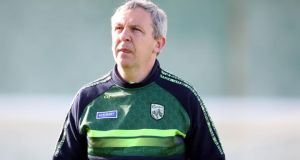 Peter Keane has been confirmed as the new Kerry manager on a three-year term. Photograph: Bryan Keane/Inpho

Peter Keane, appointed as expected the new Kerry football manager at Monday night’s meeting of the county committee, will know that he is unlikely to be granted an extensive honeymoon period in the position.

Next season will mark five years since the county’s last senior All-Ireland and 10 years since the one previous to that. Furthermore – although this will be played in a fairly low key – there is on the horizon the prospect of Dublin winning an unparalleled five-in-a-row, a quest that Kerry famously failed to complete in the very last moments of the 1982 final.

It is unlikely that there will be extended tolerance for lengthy projects or multi-year plans.

Initial signs though are positive for Keane, 47, who owns a business in Killorglin. County chair Tim Murphy’s proposal of him was unanimously carried and his management team will be Donie Buckley, who coached Mayo until this summer, former Footballer of the Year and outgoing selector Maurice Fitzgerald, who is also a club mate of the new manager, and two of Keane’s selectors with the All-Ireland winning minors of the past three years, Tommy Griffin and James Foley. They will serve a three-year term.

There had been some views in the county that he mightn’t, for one reason or another, get to bring his minor management with him and so the presence of both Griffin and Foley is a sign of the new manager’s strength, as is the duration of three years rather than an initially-rumoured two – although these appointment terms can prove notional depending on how the success of the management.

Griffin from Dingle was a versatile player who won All-Irelands at both full back and centrefield, whereas Foley is from Kilcummin.

Fitzgerald will provide continuity from Éamonn Fitzmaurice’s management whereas Buckley is probably the highest-profile coach in the game, having worked previously with Mayo, his own county – he scored the winning goal for Castleisland Desmonds in the 1985 All-Ireland club final – to whom he now returns and Limerick.

He proved influential and popular with players in those positions even if the role in Jack O’Connor’s Kerry management ended abruptly in 2012. In Mayo, however, he was credited with improving the team under James Horan and continued to serve the county until this year at which stage he was rumoured to be interested in returning to an involvement with his own county.

It is a major progression for Keane after three years of leading the county minors to the last three All-Ireland titles – as well as a record sequence of five-in-a-row – and he takes over from Fitzmaurice, whose six years yielded one All-Ireland in 2014.

If Fitzmaurice took charge of a team in transition, Keane takes over with expectations as high as ever in the county.

Although this is his first senior county involvement, he took his own club St Mary’s to a junior All-Ireland in 2011 and managed Legion in Killarney to the 2015 county final where they lost to South Kerry.

Further details of the back-room team will be announced later.

Meanwhile, Brian Cody wil remain as Kilkenny hurling manager for a 21st season after he was ratified at a county board meeting on Monday night. Cody’s backroom team remains the same, with Derek Lyng and James McGarry continuing as selectors and Michael Dempsey as trainer.