Standing committee will discuss the five proposals with one limiting handpassing 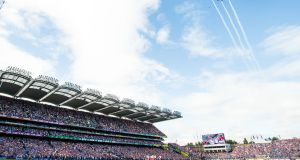 The GAA has announced a series of radical reforms to Gaelic football for consideration ahead of next year’s national league.

The restriction of the handpass and the extension of the mark to inside the 20-metres line will, if introduced, have an immediate and sweeping impact on both the playing and the tactical approach to the game. A new proposed rule for the kick-out, limiting the number of players permitted between the two 45s to just two from each team, would also lead to a sudden shift.

The series of experimental rule changes were announced on Tuesday afternoon by the GAA’s Standing Committee on the Playing Rules and if passed by Coiste Bainistiochta, they will be trialed throughout next season’s national league. Irrespective of their success, the rules would not apply to the All-Ireland championship until the 2020 season.

The improvisations represent a concerted attempt to combat or divert the attacking methodology and defensive patterns which have led to sustained criticism of the way Gaelic football has developed, particularly this summer.

The proliferation of the hand-pass has become a ubiquitous feature of the game as teams attempt to play through both condensed defences and high, pressing systems which pressure the team in possession as they carry the ball up the field. The proposal is to restrict to three the number of consecutive hand passes a team.

It is likely to be the most controversial of the proposals as it will radically alter the way coaches and players structure attacks in which the hand-pass has been used as a first-choice and high-speed method of transferring the ball.

The obvious criticism is that defensive teams will wait until an attacking team has ‘used’ their three hand-passes before jumping the next player in possession to force a rushed kick-pass and a turnover.

The second major talking point will revolve around proposed changes to the kick-out, which has become a primary battle ground between competing teams in recent years.

The accuracy and range of goalkeeper’s restarts has been one of the main developments in the game over the past decade. The new proposal, making the central area of the pitch between the two 45s a clear battle between opposition sets of midfielders, is designed to reduce crowding in that area and restore the tradition of high fielding. It has also clearly been devised to eradicate the short kick-out.

The rule states: “The goalkeeper and a maximum of six players from each team shall be behind the respective 45m lines, until the ball is kicked. The ball from the kick out shall travel beyond the 45m line before being played by a player of the defending team.” If implemented, it will dictate the tactical alignment of both teams, dictating an even distribution of players throughout the field- until the ball is in the air.

The proposed penalties for infringing on these rules are significant. If a player on the team taking the kick plays the ball before it crosses the 45, the kick out will be cancelled and the ball thrown in on the defensive 20 metre line. If a player breaches the 45 metre lines before the ball is kicked or tries, in the opinion of the referee, to delay the kick out by not retreating behind the 45m lines “in a timely manner”, then a 45 metre free, directly in front of goal, will be awarded to the opposition team. In other words, not obeying the kick-out rules will likely lead to a point for the other side.

It is an amendment that will require another big adjustment from teams and coaching and is likely to slow down the feature of lightning quick restarts which have become a common part of the game in recent years.

Proposal three, dealing with the mark, is designed to encourage more long-range kick passing to inside forwards. Any kick delivered from beyond the 45 and caught cleanly- and without touching the ground- on or inside the 20 metre line will lead to the choice of a mark: a free kick for the recipient. A score may be taken with the free kick, which will be taken on the 20 metre line directly in line with the area where the return was made.

It is an adjustment which would favor high fielding, attacking specialists and which, if it becomes a permanent feature, would place a premium on such players.

The SCPR has also proposed bringing the ‘Sin Bin’, trialed before by the GAA, back into the equation. A black card or two yellow cards issued to any player would see that player leave the field of play for a period of ten minutes. A subsequent black or yellow card infraction will be followed by red-card penalties.

The committee examined extensive footage and data on inter-county games from 2011 until the season just passed. Their changes were devised with the intention “of enhancing the core skills of Gaelic football,” said chairperson Dave Hassan.

A period of consultation with players, coaches, referees and officials will now take place before the proposed rule changes are submitted for approval.

Experimentation Proposals from the GAA Standing Committee on the Playing Rules

1 Handpass: To introduce a restriction of three consecutive passes of the ball with the first or open hand by players of the team in possession.

2. Sideline Kick: That the ball shall be played in a forward direction from the kick.

3. The Mark: To extend the Mark to the clean catching of the ball on or inside the 20m line from a kick delivered beyond the 45. The option of a kick at goal is permitted should the player avail of the Mark.