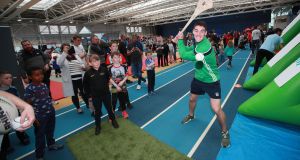 They waited 45 years to bring it back to Limerick and then made sure it got the homecoming it deserved. Only with one condition: almost every living person in the county may have laid a hand on the Liam MacCarthy cup by now but it hasn’t once set foot inside a public house.

It’s not just that some of the Limerick players are still so young as to possibly be refused entry. Most other All-Ireland-winning teams make a habit of doing the pub crawl and Limerick wanted to do things a little different.

“It was something the county board and management just said, as a bit of respect,” says defender Seán Finn, at 22 one of the new generation of Limerick hurlers and also a likely All Star at corner back such was his magnificence this summer.

“It takes a bit of pressure off the players as well, in that they aren’t expected to bring the cup around to pubs, and personally I think it is a super, super idea. And a lot of counties should follow suit in the future.

“It gives a good representation of the players and of the county as well. The younger kids don’t see it going into pubs. The last few weeks we have been going into schools and clubs and that’s where you need to be going. That’s where you develop a new crop of Limerick hurlers over the years. They remember those days when it comes into the schools and a lot of people won’t remember it going into a pub.”

It’s representative of this new breed of Limerick hurler in other ways too. The scale of the homecoming was unlike anything seen in recent years and the players have been keen to soak up and remember every minute of it – some up nice and early the morning after for a recovery dip in the pool of team hotel at Citywest. They are the model of how to celebrate an All-Ireland in modern times.

“A few people are saying that, alright,” says Finn.

“But it was the norm as well. We are used to going into the pool. We obviously enjoy ourselves after that but, it was the norm. Maybe we weren’t aware that others mightn’t have done that in the past. Sometimes we meet up and got to a river where there is cold water. It doesn’t matter if we went out the night before.”

“But there was a different element within the group this year, different buzz. It was glaringly obvious when you came into training that that buzz was there. If it wasn’t there you would have noticed. Winning and momentum brings that as well.”

Finn’s rise in the game has mirrored Limerick’s recent revival. Two All-Ireland U-21 titles, in 2015 and 2017, gave the man from Bruff all the belief he needed to break onto the senior team, but things haven’t always gone entirely smoothly. He missed all of 2016 after tearing his cruciate.

He remembers too playing against Cork at the start of 2017, and a small section of the Limerick crowd venting some frustration at the slow progress of new manager John Kiely.

“That seems like a long time ago now, but lot of the players were aware of the criticism that he got. That’s part and parcel of the job. John is very cute, very level-headed. He obviously had that in the back of his mind that people gave him criticism that time. He is doing the work and he got the reward.”

Already Limerick are being burdened with the task of winning back-to-back All-Irelands, a feat the likes of Tipperary, Clare and Galway have all fallen short on in recent years.

“John is a superb guy, and so too the guys in his backroom team. They won’t let us get carried away. We are certainly enjoying the experience and that but they are good at managing us individually and collectively. They are doing a super job at that. They are always in touch with us about certain stuff. People will be looking to get an extra per cent or two out of themselves when they are playing the All-Ireland champions.

“A lot of things will fall right if you do that, you are hungry and you are modest. If you stay like that ... you see Kilkenny over the years, the work never stopped. There will come a point where you have to say that the celebrations are over and you have to put the head down and fight again.”

After graduating with business degree in UL last May, Finn had intended on travelling at the end of the season, but decided to stick around to soak up the winning aftermath. They only waited 45 years to bring it back to Limerick.