GAA Statistics: GPS figures revealed and what use are they? 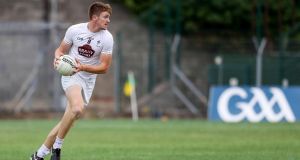 Intercounty players are being assessed like never before – GPS tracker pods are now measuring exactly how far, fast and often they run in a match.

But what do the figures actually reveal and which measurements are most important?

Kildare footballer Kevin Feely is one of the country’s finest midfielders. A former professional soccer player in England, he is renowned for his athleticism and high fielding.

In a championship match this year Feely covered 11.79km and his total sprinting distance (running at high intensity) was 1854m. He hit a maximum speed of 8.5 metres per second and made a remarkable 106 overall sprints (anything faster than 16.6km/h).

According to studies carried out by Athlone Institute of Technology, the average distance covered by an intercounty football player is 9.22km, the average sprinting distance (higher than 20km/h) is 1731m, and players are on average making 44 sprints and hitting a max speed of 8.41 m/s.

Ronan MacRuairí, the senior vice president for Catapult Sports who provide the GPS tracking devices and readings for numerous intercounty teams, explains that overall distance covered is not necessarily a performance-based reading. Despite it being the most referenced measurement, it is not a direct reflection of fitness levels.

“Rather than being a judge of performance for managers, it’s more so used by the fitness teams and physiotherapists. It’s important for them to look at the volume players have gone through before making their training plans for the week ahead. Especially with minor sides where underage players are playing with numerous teams.

“Generally losing teams will run further as they are chasing after the ball, so a lot of it is dependent on the game and the tactics.”

What would be of more significance however are ‘power plays’ (or what Kildare refer to as overall sprints). In this year’s Connacht final Roscommon wing back John McManus covered the second most distance for his team, 10.23km. He was bettered by another half-back who ran 10.28km. The Roscommon Gaels clubman recorded the highest sprint distance (2252m) and the highest number of power plays – an impressive 96 of them.

The same players made up the top three in all of the above categories (two half backs and a half forward).

Likewise in the Connacht semi-final against Leitrim, two Roscommon halfbacks and a half forward covered the most overall distance. McManus was again second with 10.11km (the highest figure was 10.38km). The same three topped the sprint distance, while McManus again had the most power plays in the semi-final – 93.

The top speed recorded by any Roscommon player in their two Connacht championship matches was 9.12 metres per second and the average top speed between the two matches was 8.34 m/s.

“A power play is basically a high intensity, explosive movement on the pitch,” explains MacRuairí.

“It equates to two watts per kilo of body weight, and must be maintained for at least two seconds. It’s typically an action between two and five seconds. So essentially it’s measuring a maintained acceleration, and there is an acceleration chip in our tracker pods.

“It is the main thing intercounty managers are looking for, and to see if their players’ intensity has been maintained. We record this by looking at distance per minute. And we break the game into five-minute blocks to see if a player maintained their running throughout the match.

“GAA championship distances per minute would normally be higher than in the Champions League, we’d find that GAA teams would rank up there if not exceed any team sport. Barring maybe Australian Rules football. And the ball typically does more of the work in hurling than Gaelic football but the gap is closing.”

In one championship match this year Galway’s hurling All Star centre back Gearóid McInerney covered 8.7km, in another he covered 9.605km, hit a maximum speed of 8.51 meters per second and made 42 sprints. The Oranmore native is one of the most physically impressive players in the modern game. But generally running distance figures in hurling do tend to be lower than in football.

Looking at the data from another Division One football team in a match in the 2018 championship, the greatest distance recorded by one of their players was 10.19km. That was from a wing forward, the next highest was the centre forward with 9.85km followed by a wing back with 9.58km.

As for average sprint distance, that was 1192.55m, average top speed was 8.61m/s and the average distance per minute was 75.27m. The centre half back and two corner forwards covered the least distance and the team’s six substitutes covered an average of 4.15km each with 28 power plays per player.

Going back to Roscommon in their Connacht final defeat to Galway, and despite his hard running, John McManus had 16 fewer involvements than Enda Smith (who had 46 involvements, 24 with a neutral outcome and 15 with a positive outcome triggered by him). The Rossies’ number 11 covered only the fifth longest distance on the Roscommon team over the 70 plus minutes, but Smith still managed to assert a major impact on the contest.

Likewise Ultan Harney, who came off the bench shortly before the interval, recorded 25 involvements.

Interestingly, in Roscommon’s league game against Cavan, two players covered more distance than any figure recorded by a Roscommon player in their provincial championship encounters. Ten weeks before their championship opener, one of their wing forwards ran 11.04km.

There’s no doubt the GPS data collated is proving useful. Take a look at the back of any intercounty player for confirmation of just how widespread the trackers have become in the GAA. But running the furthest isn’t everything, and the way that data is now being used at the top level actually reflects that.