Cahill interested in Tipperary job if the opportunity arises 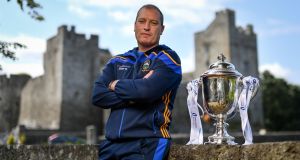 Tipperary U-21 manager Liam Cahill will certainly consider running for the Tipperary senior job if the opportunity arises, with the Ballingarry native honoured to be linked with the position.

“It’s an honour to be linked with it you know, you get excited when you hear about it. You want to say yes straight away but that’s not the case. It’s such a big role and there’s so many different things involved in the role that it would have to take a little bit of consideration to make sure that you’d have the qualities, number one, and then to have the support number two but that’s all very well. You have to be asked to be interested in the role. I haven’t been asked.

“If I’m asked definitely I’ll give it consideration but the reality of it is I’m Tipp U-21 manager at present and have another two years if I want at U-20 level and for me that’s what I enjoy and that’s where I’m going to stay if the opportunity doesn’t arise and that’s fine with me as well.”

Tipperary overcame reigning champions Limerick in the Munster semi-final, with the Treaty County side featuring senior stars such as Kyle Hayes and Séamus Flanagan who excelled in Sunday’s All-Ireland senior final.

“When you see the likes of Kyle Hayes, Séamus Flanagan, Tom Morrissey, all these guys either U-21 or just out of the U-21 grade for Limerick, perform at the highest level in Croke Park on Sunday and win a senior All-Ireland it just gives that little bit more encouragement to all players at that age group be it Cork or Tipperary that they’re not that far away from being capable of playing in the big stage as well.

“nd we beat Limerick in a Munster semi-final. There was a number of them players involved and we beat them and beat them quite comprehensively so we’ve to tap into that and see can we produce the same performance against equally good opposition on Sunday.”

Cork overcame Tipperary by 13 points in the Munster decider, with the Rebels prevailing on a scoreline of 2-24 to 1-14 on the day and Cahill admits that the pacey Cork forward line will take some stopping at the weekend if Tipperary are to come out on top.

“Cork have phenomenal pace and if they get space with their pace they’ll hurt you and for us it will be case of trying to reduce that kind of space for their pacey players and you know you have Robbie O’Flynn, you have Kingston, you have Coleman, you have Fitzgibbon.

“The problem for Tipperary is they have so many and will we be able to hold them all – probably not, but can we curtail them, we’ll do our best. Cork were far superior seven or eight weeks ago in the Munster final so we have a lot of areas to address if we’re to close that gap next Sunday.”

Tipperary look set to have a full contingent of players available for selection at the weekend with no players carrying an injury heading into the game.

Cahill was speaking ahead of the 2018 Bord Gáis Energy GAA Hurling U-21 All-Ireland Championship final preview in Cahir House Hotel.