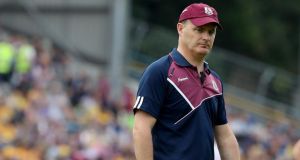 Micheál Donoghue: “I think Croke Park, the powers-that-be, need to sit down with all the parties. I don’t think they can just come with proposals.” Photograph: Bryan Keane/Inpho

Galway, now a mere footnote from this 2018 hurling championship, quietly emerge from the old Burlington hotel in Ballsbridge.

Sinewy men towering above the normal, Johnny Glynn and Pádraic Mannion mingle with young children of the Tribe, stalling to sign jerseys.

David Burke eases through the lobby, in clear pain from a belt to the mouth, the captain is understandably reticent to talk.

There’s no sign of Joe Canning nor the heavily concussed James Skehill. Again; it makes sense not to congregate as the latest bus load, decked in whiskey-branded attire, come checking-in.

Eventually the panel settle, in dribs and drabs, at the tender bar.

So, Micheál Donoghue continues to control the message; Galway underperformed but Limerick played the game on their terms and chasing an All-Ireland final requires total collapse from the opposition.

Polite as ever, the Clarinbridge native recognises this latest impostor.

“The biggest thing is hunger and desire. Limerick had that in abundance but so did our lads. It was a massive opportunity. We never really talk about winning or losing the game but we all wanted the same thing. The goal at the start of year was to get back here. We got there but just disappointed it didn’t go our way.”

A nudge for Canning as hurler of the year is met with Mannion’s candidacy before the stock reply about the collective. Talk of too many games squeezed together is met with agreement yet resignation.

“I don’t think any two years or two games are going to be the same. We came through the provincial okay. Obviously two massive games against Kilkenny and Clare, both going to replays we could have done without.

“No matter what I say or we say all the credit has to go to Limerick. What John [Kiely] and Paul [Kinnerk] have done there is an incredible job. They had massive momentum and got their just rewards.”

The calendar and clump of fixtures bobs to the surface.

“The reason they are such a great bunch to work with is they are so committed and so determined to be successful . . . Look, they have to go back to the club now and play a lot of club games for the next two or three months so that’s going to take its toll as well. Hopefully when they do get their down time that builds up the hunger for next year.”

They need time to recover now more than ever before?

“They do. So do every other team. Where it’s been a fantastic summer for hurling and the new structures overall have gone really well, it is still fairly demanding.”

The GAA have gifted September to rugby and other sports in order to help their club game clear a seemingly constant fixture backlog.

Donoghue is not the first inter-county manager, operating at the elite level, to wonder aloud why they were not consulted on decisions that impact their players directly.

“This is only my view but I think Croke Park, the powers-that-be, need to sit down with all the parties. I don’t think they can just come with proposals. They need to sit down with managers and with players to see what they recommend. I think you will see different focus and attention going forward into the league and again the championship next year.”

It is put to Donoghue that shortening the inter-county championship yet keeping the club All-Irelands stretched out to March continues to pay Paul from Peter’s war chest.

“It’s hard. With Galway [clubs] we are very fortunate that we go straight through to the All-Ireland club series. From my perspective sometimes it is a disadvantage as we have a few lads at the biggest clubs in Galway. Therefore, you are going to be minus those in your preparation.

“I think there is a general consensus that there has to be a collective review on it.”