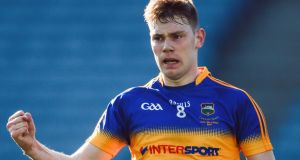 A late smash and grab effort by Tipperary lifted them out of the bottom of Division Two and left erstwhile table-toppers Donegal stunned.

Tipp trailed for much of the game but stayed in it largely thanks to goals by Steven O’Brien and Liam McGrath and then hit the front in the 64th minute with a brilliantly-placed goal by Liam Casey and tacked on further points to carve out an unlikely win.

In the first half, Donegal’s direct passing paid dividends with nice scores from Michael Langan, twice from play, as well as Niall O’Donnell and Jamie Brennan.

Tipperary, by comparison, were more laboured in their build-up play but when they ran at their opponents they made hay. Kennedy set up a point for Philip Austin, always dangerous at wing-forward, and O’Brien in the middle along with Brian Fox and Alan Campbell and Kevin Fahey in defence were useful in possession.

The visitors led by 0-10 to 1-4 at the interval and would have been further ahead but for a brilliant Michael O’Reilly save, diving to his right, from a 32nd minute Brennan penalty after Hugh McFadden was fouled.

Tipp’s opening score of the second half didn’t arrive until the 54th minute and it was badly needed when it came, a long free by Liam McGrath freakishly deflected into the net thanks to a mix-up on the Donegal goal-line, before their grandstand finished decided things in their favour.