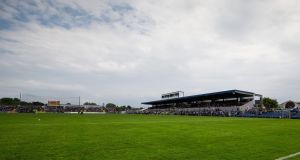 Clare enjoyed a win over the Cork footballers in Cusack Park on Sunday. Photograph: Laszlo Geczo/Inpoh

Clare made an early season statement against their Munster rivals Cork as they easily dismissed the challenge of a disappointing Rebels team at Cusack Park, Ennis on Sunday.

The home side got off to a dream start with early goals by David Tubridy and Conall Ó hAiniféin, either side of a Cork point by Mathew Taylor. Colm Collins’ men dominated the opening half and lead by 2-6 to 0-6 at the break. The second half began with a Clare point by Clare substitute Sean Collins, while Cork replied with a Liam O’Donovan score.

Clare’s ability to defend stoutly in the second period had a keen bearing on the final outcome. The Banner County pushed on and held a 2-10 to 0-8 lead by the 62nd minute. Cork were then thrown a lifeline moments later when team captain Ian Maguire punched to the net, to narrow the gap. But that was as close as the Leesiders got. The hosts regrouped, picked off a few points and bagged a third goal deep into injury time through another substitute, Kieran Malone.

This was Clare’s first win in three outings, while Cork now have just a single point on the table.