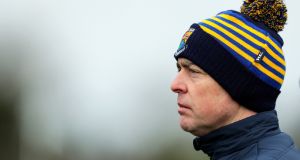 Longford footballers - without their contingent from Leinster club champions Mullinalaghta - were nonetheless a cut above hosts Carlow at Netwatch Cullen Park on Sunday.

Carlow will reflect on two missed goal chances in the opening half, when backed by the strong wind. On 23 minutes Chris Crowley’s close range palmed effort was straight at Longford goalie Paddy Collum. Then, on the half hour mark, Daniel St Ledger’s fiercely struck penalty crashed off the Longford upright and came back into play.

Longford laid the foundation for victory by holding Carlow to level terms at half time, 0-5 apiece.

The visitors were the dominant side in the second half and made sure of the league points on 61 minutes when a high ball form midfield by Colm P Smyth was finished to the net by Conor Barry, who had only joined the action on 47 minutes.

Both sides ended with 14 men as Carlow’s Sean Murphy received a second yellow card on 62 minutes while in the dying stages Longford’s Darren Gallagher received a black card.