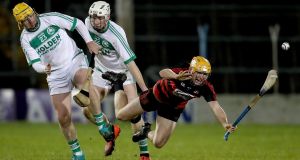 TJ Reid says that having his return to the Kilkenny team delayed by another month or so is a small price to pay for having Ballyhale Shamrocks in another All-Ireland club final.

The 31-year -old has already won three All-Ireland club titles, captaining them to victory in 2015, but says the infusion of young talent is about to create another golden era for the most prolific winners of the Tommy Moore Cup.

They have won six of their seven final appearances – they lost to Blackrock in their first final in 1979 – and now only St Thomas of Galway stand in their way next month, with Henry Shefflin just 60 minutes away from crowning his first season as a manager with an All-Ireland title.

“Paddy’s Day is a day that we really look forward to, we love it,” said Reid. “Down through the years, it’s been a tradition for Ballyhale Shamrocks.

“I suppose in terms of the old team and now the new generation coming through. It was a tough game, Ballygunner are very good hurlers. I think they only scored 0-3 from play, that showed the work-rate of the whole panel.

“Definitely this year winning the county final gave them great belief. I think winning the U21 last year gave those boys a great sense of belief and confidence as well. You saw this year all those young lads all stepped up. This year everything was new: new management, new trainer, there was a bit of freshness there as well. There’s massive transformation in the last three years,” added the former Hurler of the Year.

Reid managed just a point from play and they weren’t over-dependent on Colin and Mick Fennelly either as the young brigade took control, none more so than teenager Eoin Cody, a nephew of manager Shefflin.

His last appearance in Semple Stadium in the post-primary schools All-Ireland final last March when St Kieran’s defeated Presentation College from Athenry when Cody came on as a substitute and was then taken off in extra-time.

“He is talented and if you give him the ball he will finish it. It’s brilliant. The last time he was here in Semple Stadium he came on as a sub for St Kieran’s this time last year and was taken off again.

“So for any young lad, you just keep going. He’s been skilful since he was a young chap and I’m delighted that skill showed out there today.”

The Leaving Cert student struck for the game’s decisive score after 44 minutes when he collected a delivery from Patrick Mullen over the head of Harley Barnes, bounced off Wayne Hutchinson and raced through to supply a sublime finish.

That score put Ballyhale ahead for only the second time in the match and they pushed on from that 1-10 to 0-10 advantage to close out the victory, exchanging points three times before Adrian Mullen and Cody wrapped up the win.

Ballygunner, bidding to reach their first final, were far too dependent on Pauric Mahony from placed balls and, while he landed 0-10, they only managed three points from play over the hour.

In contrast, Ballyhale got stronger in attack after the restart after they turned around trailing by 0-8 to 0-7, with Patrick Mullen, Eoin Reid and Adrian Mullen adding to Cody’s haul, all of which ensured a disappointing evening for the Waterford champions.

“We were happy at the break but that goal probably was – in a low-scoring game – very much a killer blow,” said Ballygunner manager Fergal Hartley. “They were threatening and were probably getting their scores a little bit easier than us, but the goal was a killer.

They did their homework and closed us down, closed down the space

“It opened up a gap we just couldn’t bridge.

“It’s hugely disappointing but that’s the nature of hurling. Ballyhale were deserving winners on the day.

“Ultimately, I think 1-15 isn’t a score that can’t be beaten, but we didn’t get as many scores. Thirteen points is probably the lowest score we’ve been held to, so they did their homework and closed us down, closed down the space.

“We didn’t get as many scores as we’d like to get so I wouldn’t be overly critical of our defence, because 1-15 isn’t a bad score to hold a team like Ballyhale to. We needed more scores at the far end and we didn’t get them,” added Hartley.

Exeter coach Baxter calls for an end to mass Covid-19 testing in rugby 16:01
Colin Keane has Shane Foley in his sights as they head for Cork 15:52
Dermot Weld’s Tarnawa won’t be aimed at the Arc 15:47
All Blacks facing a Christmas in quarantine 15:33
World champions South Africa could miss Rugby Championship 15:27
Crossword Get access to over 6,000 interactive crosswords