Meath reveal the fire in their bellies with Armagh win 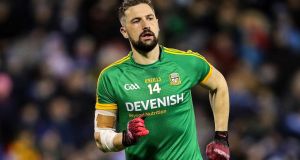 Was there a touch of mischief in the song choice selection ahead of their emergence onto the pitch? Just before Meath raced out onto the old sod and into the cool air here in Navan, the playlist over the public address blasted out a song which hinted at possible future combat.

“Where the strawberry beds, sweep down to the Liffey . . . .” came the lyrics, almost as if selected to irritate a sleeping giant back to life.

Not that Meath’s players need any irking these days. Into the third year of Andy McEntee’s management, the baby steps have grown into rather large strides and - certainly on the evidence of this performance - it doesn’t seem quite a leap any longer to envisage them once again challenging those Dubs. That’s for another day, though.

On this particular day - one where a strong wind whipped in over the fence from the hospital end to whip its chill directly down the field to the town end - Meath’s ongoing evolution continued with a vital win in this Division Two encounter that displayed an array of attributes. From a wind-assisted first-half that saw them amass an nine points interval lead, only for that advantage to be whittled away in the second-half down to a mere point, before a late surge, this was a victory that revealed the fire in their bellies and a growing maturity.

That Ethan Devine, a 20-year-old thrown into the fray when the need was at its greatest, produced the decisive winning goal to finally put Armagh away was enough to provide an extra layer of warmth to the large home support who ensured the old ground rocked to its own beat when referee Rory Hickey eventually brought things to an end.

Meath dominated the early exchanges, four different players scoring four points inside the opening five minutes. But there then followed a 15 minute scoring drought, only ended when Mickey Newman blasted home a penalty awarded after Thomas O’Reilly was upended as he sought to lay off a pass. “Stonewall penalty,” insisted Newman afterwards, and his accuracy - from placed ball and hands - gave him a personal tally of 1-5 in orchestrating his team’s win.

Armagh struggled in many areas in that opening half, often taking poor options - like futilely kicking from distance into the strong wind - and losing possession and were perhaps lucky to be only nine points down at the break. “That hard edge you need in Navan or in Croke Park, it takes years to get. Sometimes you don’t do what’s right in front of your face, you just have to take a pause and maybe we’re not good at that pause,” conceded Armagh manager Kieran McGeeney of some of that first-half decision-making.

But McGeeney’s men were transformed on the re-start and rapidly reduced Meath’s lead - Rian O’Neill and Rory Grugan especially impressive in the fightback - to the point where the deficit was a single point after Stefan Campbell kicked a fine point in the 56th minute.

With the wind in their sails, and Meath floundering, it looked as if the game was Armagh’s for the taking. Wrong - Meath, on the rocks for much of the second-half, readjusted and, instead of turning over the ball or kicking possession away, successfully retained possession and made incisive runs with Donal Keogan’s switch to the wing providing him with more scope to assist the attack.

As the clock turned 60 minutes, Meath’s lead stood at 1-10 to 0-12, their second-half return a meagre one point from a Newman free up to that stage. In the final 10 minutes, though, plus into the four minutes of injury time, Meath reasserted themselves: Newman was calm and foot-sure in kicking two pointed frees, O’Reilly kicked an excellent point on the run and, then, the icing on the cake came when Graham Reilly’s skewed kick came up short for Newman to get a touch to pass the ball on to Devine and he finished with a cute touch of his own.