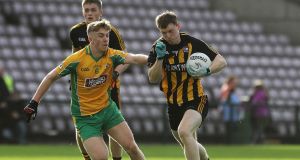 Mountbellew Moylough inflicted a first Galway football championship defeat since 2012 on All-Ireland champions Corofin to qualify for the county final against Maigh Cuilinn.

Patrick Kelly and Paul Donnellan scored the crucial second-half goals for Mountbellew Moylough who brought Corofin’s proud run of 49 games unbeaten and dreams of eight Galway senior titles in a row to an end at Pearse Stadium.

This was a terrific performance from Mountbellew Moylough, who have played all year without inspirational defender John Daly, but a brilliant performance from full forward Eoin Finnerty, which saw him score six points from open play, saw them reach a fourth final in six years.

“Obviously we are happy. Corofin have been the dominant team in Galway football for the last number of years,” said Mountbellew Moylough manager Val Daly, whose side claimed a 2-13 to 0-12 win.

“We put in a good performance and we deserved it.”

Mountbellew Moylough started brightly and led 0-4 to 0-2 with Barry McHugh, Finnerty, Sean Miland and Michael Daly on target, but four points in three minutes helped Corofin lead by 0-8 to 0-7 at the interval.

Meanwhile, Maigh Cuilinn reached their first Galway senior final since 1977 as goals from Dessie Conneely, Owen Gallagher and Paul Kelly edged them past Tuam Stars on a 3-14 to 1-15 scoreline.

Early goals from Antrim’s Gallagher and Conneely put the Gaeltacht side into a convincing early lead, and despite a Tuam revival led by Cormac McWalter Maigh Cuilinn were well in control leading 2-9 to 0-8 at half time.

1 Level 5 golf shutdown: Ireland one of few countries to close courses
2 Dan Martin toasting another stage win at the Vuelta
3 Philip Reid: Hard to find the sense in closing golf clubs
4 Shock at golf clubs as sport faces shutdown in Level 5
5 Disappointment and frustration par for the courses as golf goes into lockdown
Real news has value SUBSCRIBE