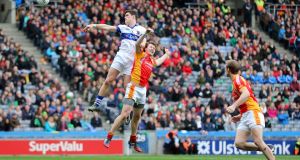 Diarmuid Connolly’s retirement has drawn plaudits from all around the world of football and whereas the emphasis on his mesmerising skills and the manner in which he deployed them on many big occasions is understandable, he was always a more complex character than suggested by the ‘wayward genius’ portrayal.

His technical skills were showcased by an athleticism and physicality that were the products of an extremely dedicated player, albeit one who could be distracted.

Because of these assets he could play anywhere in the top eight positions and probably farther back if required. He and Paul Flynn were like sentries at wing forward under Stephen Cluxton’s kick-outs.

It’s worth noting, as the public perception is of a player generally at odds with the media, that he was a great interviewee. In the modern game players are generally coached in being as anodyne – or at least as guarded – as possible but in his rare engagements, he was forthright and direct.

Intriguingly for someone whose cause was always being pleaded by others on social media to mitigate whatever disciplinary bother he was in, Connolly himself was devoid of self-pity.

Memorably, at a media event to promote the 2016 Leinster club final, he was asked about Dublin CEO John Costello’s complaints in his annual report, released the same morning, about the level of targeting aimed at the player.

Initially dismissive, Connolly ended up expressing surprising equanimity in his analysis of the matter.

“At the same time isn’t it a testament to your own skills that somebody needs to step out of line to curtail you. That’s a compliment really and that’s the way you look at it.”

It was hard-earned, as he was twice red-carded in All-Ireland semi-finals and even afterwards, a loss of composure would cost him nearly an entire championship for pushing a match official in 2017.

At the above media conference he was asked why he had chosen to do the event given his generally arms-length attitude to reporters. “As I said before, I’m captain and I’m representing Vincent’s so that’s it. Other than that, nothing really.”

That Vincent’s identity was central to him. Not all county players are as enthused by their clubs but Connolly went around the clock for his in the middle of the last decade, reaching the All-Ireland stages three times in four years and delivering as good a performance in 2014 as anyone in a club final.

There was a yarn about him that in the aftermath of a Dublin All-Ireland win when players are wrecked, nursing injuries and otherwise finding it hard to flick the switch for county championships, Connolly was always back in Vincent’s, driving the standards rather than standing around to be admired.

He is said to have informed a lacklustre training evening that if they weren’t putting it in, he could always go back drinking with his county colleagues.

The impact of his retirement has probably been softened by the fact that his last three years were more peripheral. Suspended for much of 2017, he withdrew from county involvement the following year and went to Boston.

He was due back there last summer, as Dublin prepared for the conclusion of their five-in-a-row mission.

When that didn’t happen because of a visa complication in what was a very public setback, there was surprise that someone as ferociously disciplined as Jim Gavin would take him back mid-campaign and maybe within the episode early signs that the manager was thinking of bringing down the curtain.

Of course Gavin was interested in what Connolly might bring to the pursuit of history. It was clear however that there was also a sentiment that one of the great contributors to that journey – whatever difficulties he was experiencing at the time – deserved to be welcomed on board for the final passage.

Kerry cruise to Division 1 title – now for the bigger business 16:37
Substitute Foden resuces a point for City at West Ham 15:02
‘The knee felt perfect’ – Dan Leavy on cloud nine after long-awaited return 13:42
Heartbreak for Tuohy and O’Connor as Tigers down Cats 13:14
McIlroy well off pace as Thomas leads low-scoring Zozo 10:24
Crossword Get access to over 6,000 interactive crosswords