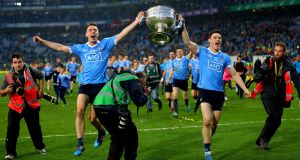 Dublin footballer Diarmuid Connolly has retired from intercounty football at the age of 33. One of the most gifted footballers of his generation, the St Vincent’s player won six All-Irelands with the county, missing out on the seventh when he took a year out in 2018.

The news, announced on the Dublin GAA website on Wednesday night, will come as a blow to manager Dessie Farrell, as it comes little more than a fortnight before the year’s much delayed intercounty season begins with the remaining league fixtures. Connolly had been troubled with injuries during Vincent’s championship campaign but his departure removes an experienced and significant footballer from the county panel.

A major influence on the county’s rise to All-Ireland success, playing across the six attacking positions, he came to prominence as an accomplished dual player in the mid-2000s – winning a Leinster under-21 hurling title – and made his senior debut for the Dublin footballers in the first league match of 2007 when the Croke Park floodlights were turned on for the first time . Coincidentally, the same evening that Tyrone’s Colm Cavanagh, who retired last week, also made his first appearance.

Tyrone played a recurrent role in his county career, from his debut to the pyrotechnics when the counties met in the 2011 championship. Six years later he was unhappy to be reintroduced to the team after suspension very late in an All-Ireland semi-final against the same opposition. The Super 8 match against Mickey Harte’s side last August has turned out to be his last start for the county.

Connolly was an extravagantly talented footballer, able to kick off both sides and with great technical ability. His overall career was at times undermined by disciplinary issues but in that context he was one of the most targeted players in the game and the provocation sometimes had the calculated effect.

Diarmuid Connolly has this evening announced his retirement from inter-county football.

His intercounty career began to falter in 2017 when he picked up a lengthy suspension for an altercation with linesman Ciarán Branagan in the championship opener against Carlow.

Later in the summer he appeared off the bench in the All-Ireland semi-final and final, although his full second half against Mayo in the latter match was deeply influential, scoring a point and drawing the free that Dean Rock converted to win the match and Dublin’s first three-in-a-row since the 1920s.

The following year he decided not to play with the county and the four-in-a-row was completed in his absence.

Last year Connolly was brought back into the panel for the concluding matches of the historic five-in-a-row campaign and he came off the bench in both the drawn final against Kerry and the replay when he effected a spectacular turnover tackle and steered a wonderful kicked pass into Ciarán Kilkenny for Dublin’s 12th point.

When Dublin’s boat finally came in, in 2011, Connolly’s display in the rout of Mickey Harte’s team saw him kick seven points from play in what is probably considered his signature performance.

That year’s semi-final against Donegal involved a red card that although severe was still justifiable and it was a surprise when the DRA cleared him for the final against Kerry – and just as well for Pat Gilroy’s team as he had a fine match in Dublin’s first All-Ireland in 16 years.

He revisited the same terrain in 2015 after being red-carded during one of his pivotal duels with Mayo’s Lee Keegan but again deliverance – this time, very controversial – came from the DRA and once more he delivered an influential display in the final win over Kerry.

He was above all a committed St Vincent’s man and played a major part in the club’s two All-Ireland successes of 2008 and 2014 – his second goal in the latter final against Castlebar Mitchels, among 2-5 from play plus two goal assists, is another in the extensive highlights reel.