It is the stock response of losing sides, but when did this quasi-mystical guff creep in? 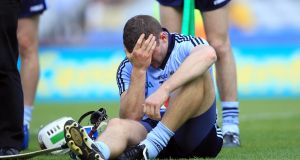 A dejected Conal Keaney of Dublin after their defeat to Kilkenny in the Leinster Senior Hurling Championship final in Croke Park on July 3rd, 2011. Photograph: Donall Farmer/Inpho

Say what you want about the GAA, but they’ll never be found wanting when it comes to the tricky business of soul-searching.

We have seen and heard the promise a thousand times now. It may come after a brutal, grinding encounter or one of those bronzed, fantastical summer championship games when both teams have pushed one another to the end and then some. The final whistle. Ecstatic pitch invasion. First, the winning manager appears for the post-match television interview, eyes lit and often curiously worked up as he tells the nation that everybody wrote his team off and that their pride was stung – and that this win will mean nothing if they don’t get through the next round. He’s edgy and rattled and excited at the same time and everything he is says is factual and wired to the moment. The soul has nothing to do with it. He’s in the results business! And he believes in his team. End of.

Then the defeated manager or captain appears, sombre as Leonard Cohen. His expression is haunted and his voice funereal. Notionally, he is looking at the empathetic gestures of Marty Morrissey but in truth he is staring into the abyss. He’ll shake his head and mutter that there’s boys hurting in there. And he might reference something practical – maybe about the wides or the early goal or, if the defeat was particularly harrowing, he may acknowledge the “gulf” in class. And, when asked where the team will “go” from here, he will look temporarily stunned to learn that the world is, in fact, prepared to keep turning. He’ll compose himself and acknowledge that the boys will just have to “regroup”. And then, sooner or later, he’ll just blurt out the sacred phrase: “Listen. We all know there’s a lot of soul-searching to be done after this.”

Nobody really knows what this means, but that doesn’t make the vow any less important. The interviewer normally doesn’t say anything either because there is no adequate reply, apart from nodding and saying, “Far out.” Instead, he or she will move the conversation on to more temporal matters, such as the yellow card count.

But the promise of soul-searching is an idea and activity that, while mysterious, is deeply reassuring for the supporters of the defeated county, who are given to understand from this that their defeated heroes are not going to nurse their sorrows by going on a two-day bender culminating in blurry video footage of the team Red Bulled to the gills and going ape-shite in a flush-faced shirtless mob to something improbable, like Lionel Ritchie’s Dancing on the Ceiling. Instead, they’ll be going yogic and reflecting deeply on . . . well, nobody is quite sure what.

But if the promise of soul-searching is comforting for the losing supporters – who, of course, are perfectly free to blitz themselves on Red Bull and play Ritchie’s entire back catalogue if they choose – it must strike a literal fear of God into the defeated players.

For championship is an unforgiving game of absolutes. You look back at the hurling and football records in recent years and there is often just the odd score between the teams. If you come out on the right side of that result, then your immediate future involves letting off steam until the early hours, a breakout visit to the takeaway and – if the win involves silverware – a Monday bonding session which basically means finding a quiet bar within the county and relieving the premises of its entire supply of Bulmer’s pint bottles and alco-pops. Then they’re back training on the Tuesday, happy out and probably not giving the whole matter of the soul all that much thought at all.

But to lose that same game is to be thrust into an entirely different realm. The GAA soul-search conjures the image of the vanquished team somewhere remote and hilly, sitting in circular repose, probably still in their gear, possibly following the incantations of a Buddhist monk while trying to block out memories of the stats sheet demanding to know why in the Jaysus they’d allowed Aidan O’Shea 23 possessions in the second half alone.

And it’s crucial, too, that the manager publicly promises to do “a lot” of soul-searching after a scarring defeat. For there’s nothing more worrying than to hear your county manager vaguely noting that the team will “probably have to do a bit” of soul-searching, as though burrowing through the unbearable pain of championship defeat, then horsing through the valleys of the subconscious and beyond the pain of childhood until they’d reach the ungraspable essence of what it means to live and die for the county jersey, was an exercise to be completed as though it was no more than a bit of stretching. Nope, the contemporary GAA soul-search is lengthy and contemplative and may well involve a weekend away – ideally somewhere four-to-five star with a 25-metre pool and a Jacuzzi. Because sitting cross-legged for hours on end may be chicken soup for the soul but ask any physio – it’s a bugger on the hamstrings.

It’s hard to know when the concept of soul-searching entered the GAA dressing room. Almost certainly not before the 1960s. If you’d suggested, for instance, to Tipp’s John Doyle and the Hell’s Kitchen crew that they might want to do a bit of soul-searching after losing to Cork, they’d have assumed you were blaspheming and rightly taken the head of you. There’s a theory that it snuck into the association after the GAA did away with Rule 42, and it was almost certainly in practice around the time of the back door system. But what was once the preserve of countercultural retreats and the East has found its way into all GAA dressing rooms now. And it’s easy to understand why: the organisation has forever been crawling with shamanistic-type cats – your Heffernan, your Loughnane, your Harte, your Páidi, your JBM – who are infused with something of the spirit of Crazy Horse. That’s why the crowd follows them.

More than 15 years have passed since Archbishop Sean Brady, in a homily delivered in Graiguenamanagh, asked a fundamental question which managed to travel from the pulpit and onto these pages. “Have we thrown out the best of the old with the worst of the new?” he asked, a question quoted in an essay Rosita Boland wrote which sought views on that very subject. This was in 2004, when the country was under the illusion of filthy riches and everyone was running about doing their best impressions of Jay-Z and JR Ewing. It was probably around the time those radio adverts appeared asking the Irish people if they were worried “where” they would bring the kids skiing over the midterm break. There was something startling about the simplicity of Brady’s question. And, a decade and a half on, it arguably remains more valid than ever.

And as we face into the cold, fraught winter of discontent, here’s a little candle flame of hope and warmth. The GAA season is almost upon is. In short, we are entering the open season of high-octane soul-searching. So if Ireland has indeed lost or even temporarily misplaced its soul, then fear not: the GAA are the very boys to round up a crack commando unit to go and find it again.