James Durcan steals a draw for Mayo in Ballybofey 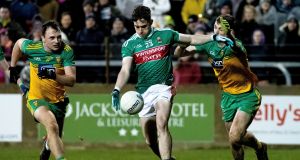 Declan Bonner seethed as Donegal were denied at the deaths by Mayo.

It was honours even, but Patrick Durcan’s goal, in the depths of added time, meant the emotions could hardly have been more contrasting in Ballybofey.

The clock was in the eighth minute over the allotted 70 when Durcan arrowed a dramatic shot to the Donegal net, earning Mayo a draw.

There was barely time to digest the superb 20-metre strike, after Durcan held off Conor Morrison, that left Donegal stunned.

“I thought it was game over, but you have to had it too Mayo. We’re disappointed in our defending for the last play, but for the majority of the game we were the better side. It was a case of taking what we could and seeing the game out.

“You have to play to the final whistle. We didn’t se it out and that’s the disappointing thing.

“For most of the game we were the better side. We’ll take the point and move on.

Before then, eight points by Michael Murphy appeared to have given Donegal a win on their return to Division 1.

As it panned out, events left them with nightmares of their last assignment in the top flight. It was a Kevin McLoughlin score, with the last kick of a March 2018 meeting that relegated Donegal.

Rocked by a James Carr goal midway through the first half, Donegal responded well and were seemingly well on their way to a win in front of 8,729.

The rivalry between these two has grown from a mutual fondness to a plain dislike over the last decade.

Mayo ended Donegal’s Sam Maguire hopes in 2019 and it was clear that this one, despite being a League opener, meant just a little more.

A cagey opening, with Donegal 0-4 to 0-3 ahead, exploded to life in the 16th minute. Carr was quickest to react to a dropping ball from Patrick Durcan. Carr seized the moment. Opting not to take the ‘mark’, Durcan instinctively looped a shot over Shaun Patton, the Donegal ‘keeper, for the opening goal of the night.

Bonner said: “The two goals were sloppy. We should have dealt with the high ball better. Sometimes you learn the hard way and that was a very harsh lesson. On the balance of play, we probably deserved it.”

You don’t always get what you deserve, though.

Donegal, with Murphy at the controls, led 0-9 to 1-4 at half-time, but were already cursing a growing wides tally that numbered seven at the break. It was nine by the conclusion.

Bonner said: “We’re disappointed that we didn’t get more up at half-time. Mayo were always going to come back. When we were three up seven-and-a-half minutes into injury time we should have held out.”

Mayo stayed in touch and James Horan’s men came back to within a point 16 minutes from time after hitting three-in-a-row from Diarmuid O’Connor, Bryan Walsh and Kevin McLoughlin.

Neil McGee and McHugh went off injured in the closing stages, but Murphy’s eighth of the night, in the 42nd minute of the second half, looked to and should have been enough.

Durcan had other ideas and, just as the curtain was about to fall, the script was torn.

Horan said: “We’re delighted to get the draw. We kept trying and kept plugging away. We kept showing, kept working and sometimes you get a slice of luck and maybe we got it tonight.

“Our subs who came on and some of our newer guys did well and they kept going. I thought in the first half we were a bit hesitant in kicking the ball in. We might’ve overplayed it at times and we didn’t get our heads up quick enough. We stuck at it.”

‘Only’ the League? Dublin arrive in Castlebar next weekend. Already, no-one wants to give an inch.