Niamh McEvoy eyes All-Ireland glory before heading Down Under 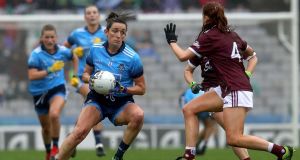 This month should have been a relaxing one for Niamh McEvoy, a chance to put her feet up and reflect on an adventurous year which included a spell playing Australian Rules with Melbourne Demons. Instead, here she is, masked up and talking in to a laptop at Dublin’s virtual media night, preparing for an All-Ireland final five days before Christmas, a couple of days after which she heads back to Australia. So much for a restful month.

It was after she and Sinéad Goldrick helped Dublin complete their three-in-a-row last year, both players subsequently receiving All Stars, that the pair set off for Melbourne to get a taste of the professional sporting life in the Australian Football League.

They soon settled in to what was proving to be a successful season for the club and come March, they were preparing for their Finals Series game against Cora Staunton’s Greater Western Sydney Giants when .... you know yourself. With the world locking down, the club advised them to head for home, the season ultimately cancelled.

“It was disappointing for both of us not to get the opportunity to finish it,” says the 30-year-old. “But Melbourne were so good in terms of having our best interests at heart, they sent the two of us home in advance of the game when I’m sure they’d have liked to have kept their squad together. But they cared about the players and less so the competition, just like Mick [Bohan, the Dublin manager] does here.”

But such was the impact the pair had, they’ve both been invited back for the 2021 season which begins in late January. For now, though, McEvoy has thoughts for only one footballing code. “My sole focus is on Gaelic football and what’s in front of me this week, so AFLW is completely at the back of my mind.

“It was a big decision for myself and Sinéad to go because we’re very invested in this group of [Dublin] players. Leaving such a special thing here, we wanted to give it our all in Australia, but Gaelic football will always be my first love and the girls I play with are nearly like sisters at this stage.

“But I wouldn’t have gone to Melbourne if there weren’t similarities with the Dublin group. And of course it has that connection to Dublin GAA through Jim Stynes [the late Dubliner who enjoyed a glittering career with Melbourne], which made it special for us. When we were over there Brian, Jim’s brother [who won the 1995 All Ireland with Dublin before also joining Melbourne], was so good to us, he had us over to his house a number of times and talked to us about coming to the AFL from a GAA background.

“The big difference is the mark. If you catch a mark over there, you stop straight away - if you did that here, Mick would kill you,” she laughs. “It was drilled in to us that when you catch the ball, you play on. So for them, that was very unpredictable, it created overlaps and so on, and scoring opportunities. Oppositions have come to expect that now when an Irish girl is playing, that she’ll play on, she won’t stop.”

There’ll be stopping in Croke Park on Sunday when the Malahide native will be aiming for her fifth senior All Ireland medal. Having played in front of a record crowd of 56,114 in last year’s final, she insists the empty stadium, while odd, won’t bother her. “Some of us older girls would be well used to playing in empty stadiums, so it’s nothing to be worried about,” she laughs. “Crowds not being there hasn’t taken away from the Championship at all for us, I don’t think there’s any focus lost there, it feels absolutely the same. And Croke Park has the best surface in the country, so we wouldn’t want to play anywhere else.”

Her partner has a busy weekend ahead too, him being Dean Rock. “I was laughing, he did the media night with Dublin and it was the first time he was asked about me - so it just goes to show that ladies football has grown a bit over the last few years, for a man to be asked a question about us,” she says.

“But it’s always a chilled vibe, mostly on his side, he’s a very laid back type of character. That’s good for me, and rubs off some of the time. We’ve been in this situation a lot of times over the last few years, we really enjoy it. Thankfully we’ve been training on the same nights the last few weeks, so we’re getting to really enjoy our football and enjoy each other as well. So yeah, a big weekend for both of us.” If it works out, they’ll have 12 All Ireland medals between them. A power couple, if ever there was one.