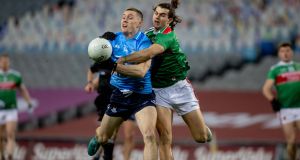 Saturday night in the lower Hogan and Con O’Callaghan’s body is telling him the bill is due for his exertions. Every so often as he answers our questions, he stops and winces and tries to get a stretch into the back of his left leg. Now, Ma and Da O’Callaghan have brought up a polite young man and so he mostly keeps it together. But God love him, at times it’s like interviewing a contestant on one of those Japanese torture gameshows.

Whatever pain he’s in was hard-earned. He and Oisín Mullin had played out one of those tussles where both came out comfortably in credit. Direct markers in All-Ireland finals can often cost each other an All Star with a big enough display. But the two of them shone here in pockets and chances are that both will find themselves on the 2020 team when the time comes.

O’Callaghan will likely make the shortlist for Footballer of the Year too. After a Leinster campaign when it wasn’t always clear what role Dessie Farrell had in mind for him, he has stormed through the back end of the championship. He was man of the match here, in the only game all year where Dublin were extended.

“I talked to the other lads there and it’s something that always happens with Mayo,” he says. “They bring such a fierce intensity, like. We knew that was the case and we had spoken about it. It’s a different story speaking about it and actually being out there.

“Like, you can review all the tapes that you want and say there are opportunities inside or there are goal opportunities but when you are in the white heat of battle, and someone is facing you down, putting you under pressure, getting contact on you, it’s much different. You are forced to make mistakes and that’s something they do really well. We struggled to come to grips with that early on.”

O’Callaghan played two distinct roles on Saturday night, one in either half. Having been bested in the early exchanges around the middle by Mullin, he got himself into the game in the deadliest way possible after the first water break. Mayo led once and were level twice in that first half – on two of the three occasions it was an O’Callaghan score that put Dublin back in front.

His goal came at the exact time that Mayo needed one at the other end. Cillian O’Connor had just nailed two marks inside 90 seconds, making it five Mayo points in-a-row. Dublin hadn’t scored in 11 minutes, in the middle of which O’Callaghan had turned down a handy point and gone for goal instead, only to see Diarmuid O’Connor pull off a covering block. Mayo were two points up and Dublin were rocking.

Enter O’Callaghan. His goal came down to two slight losses of Mayo concentration at precisely the worst time. First, Mullin got done by a fairly regulation sidestep from O’Callaghan on the 20-metre line. It was about the only thing the young Mayo defender got wrong all night and he paid an outrageous tariff for it.

O’Callaghan zipped past him and was presented with the second Mayo lapse. Cillian O’Connor had drifted back to cover Niall Scully but with O’Callaghan on the move, he didn’t have the defender’s instinct to either get out quick enough or stick with his man. Instead, he took a step and then stopped halfway out, making it an easy one-two between O’Callaghan and Scully.

“Oisín Mullin was on me, he’s a really good player,” O’Callaghan says. “I hadn’t marked him before. He won a kickout or two early on. I think I had a chance on goal. I probably could have taken an easy score to put it over.

“Yeah, I tried to take the chances that came my way. Again, it’s really just playing as part of that team. We got two team goals, which is really important to us. Yeah, maybe it did settle me down a little bit.”

In the second half, O’Callaghan didn’t take a shot. Instead, he presented himself as a blue-collar forager for ball out around the middle, helping especially in the task of turning Dublin’s kickout fortunes around. Stephen Cluxton had lost six kickouts in the first half but O’Callaghan won three in tight quarters after the break. It was as much the winning of the game as the 1-1 had been before it.

So, the season ends. Another year, another medal. For whatever reason, it’s always Brian Fenton who is picked out as never having lost a championship game for Dublin. But he’s far from alone in that. Of the 20 players who saw gametime for the champions on Saturday night, 12 have yet to come off the field defeated when it matters most.

O’Callaghan made his debut in January 2016 and in the almost five years since, he has lost three games in total, all of them in the 2019 league. Only Dean Rock and Ciarán Kilkenny have scored more during the six-in-a-row – and O’Callaghan didn’t make his debut until the second one.

This year was nothing like the ones that went before except in one fairly obvious respect. Back in March and April, another All-Ireland must have seemed far off in the distance.

“I suppose miles away, yeah,” he says. “And even when we came back, when we were allowed to train in the little pods before we were allowed to properly train, I know a lot of lads were a little bit hesitant for their own health and stuff, and their loved ones’ health.

“And even when you have that time off, some people were kind of thinking through things and maybe some people lost a bit of motivation because there is no end line in sight. We don’t know if it will happen, when it will happen.

“But definitely then it started to grow that bond again - ‘Here’s a date, we are going to be playing this date.’ It’s winter football. So what? That kind of bond and motivation and momentum starts to build and once it builds, it’s something powerful.”