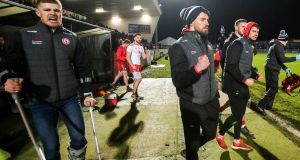 It has been an irony that a year replete with possibilities for headline writers may well end up not just without a 20/20 vision of the football year but with a radically incomplete view.

Nonetheless, years don’t simply roll by with no impact on what follows and this year would be no different even if, as some are pessimistically but not implausibly suggesting, there is to be little meaningful activity this championship.

This had been shaping up to be a significant league. Rarely has the spring competition been as loaded with new terms and conditions as this one was two months ago when about to start.

There were new playing rules, which prompted the GAA’s national match officials manager, Donal Smyth, to make a painstaking presentation to media on the cusp of the first weekend of action.

There had already been rumblings from referees about the additional burden of adjudicating the advanced mark with its requirement for slide-rule vision and at times bi-location.

Then there was the sin bin, extracted from its experimental status during the 2019 league and soldered into the rule book last October.

Unlike 12 months previously, when some managers – Jim Gavin among them – had decided not to train on the basis of rules that wouldn’t be operational during the championship, this time the changes were permanent.

The interesting thing about the league action we saw to date was that the advance mark – despite a cacophony of dissent in the lead-up to the season – had relatively little impact on the game.

Maybe this was because teams weren’t fully trained in or that the typical weather in January and February wasn’t ideal but an early-season average of a point per match was still being maintained by the time competition was suspended.

Introducing the sin bin as the sanction for a black card was advocated on the basis that the handicapped team were, on the evidence of the 2019 league, losing the 10-minute penalty period by two points. The experience of this year’s competition didn’t disrupt that but other objections stood: the running-down of the clock by 14-man teams and the appropriateness of the punishment for a calculated foul.

In competition, a big question at the start of the year was how well the five-in-a-row All-Ireland champions Dublin would adapt to a change of management. Whereas there were no definitive answers, Dessie Farrell has found himself in a difficult position this year. A relatively late appointment before Christmas – December 12th – with a team holiday to follow, and a determination to take a look at a number of new players combined with the non-availability of established personnel, such as captain Stephen Cluxton, Con O’Callaghan, Jonny Cooper, Cian O’Sullivan and Diarmuid Connolly to give the new manager no time with his full-strength panel.

Given that any championship which takes place will happen on the back of at most a couple of weeks warm-up, Farrell will be putting his plans together on the hoof and although the same rules apply to all of Dublin’s rivals, he is by definition the least experienced of all the elite counties’ managers.

There is a core of super-practised and successful footballers available to him but there are no contenders, who won’t feel the sense of possibility if a curtailed championship happens later in the year.

If sporting achievement is frequently about timing, Kerry and manager Peter Keane – the heirs presumptive to Dublin’s long lasting crown – have caught a break. Just before the pandemic struck, they were embroiled in a controversy over the dismissal of coach Donie Buckley.

One Kerryman suggested that the matter wouldn’t go away because after the following weekend’s league match against Monaghan, Keane would be hounded with questions as to why he had dispensed with the high-profile coach. Instead, the Government made their announcement in relation to coronavirus and the GAA shut down.

By the time Kerry take the field again, it’s unlikely that Buckley will be top of anyone’s agenda.

Mayo, continually distracted by the international supporters’ foundation controversy, were also watching their resilient team slip toward a first relegation in decades, a process that may not have time to reach completion unless the benign scenario of the final two series of AFL matches being used as warm-ups for any championship comes to pass.

Last year’s remaining All-Ireland semi-finalists Tyrone closed with a morale-boosting defeat of Dublin but it will probably have boosted everyone’s morale and such were the atrocious conditions that it’s likely the champions’ self-esteem wasn’t too greatly undermined. Ironically, Mickey Harte started the league under the shadow of losing Cathal McShane to the AFL and ended it – so far – with the same player badly injured.

Meath were relegated but after a competitive five matches in which they were unlucky to be stranded and branded with no points. Leinster still offers no easy path of self-improvement but Andy McEntee’s team has improved.

A major influence on the league was the imminence of a Tier 2 championship, the Tailteann Cup, for those who didn’t finish in a sufficiently elevated position – that is in the top 14 plus those promoted from Division Three, the latter achievement all but in Cork’s grasp when the curtain unexpectedly fell.

But the exchanges in Divisions Two and Three left no doubt that the Tailteann Cup, for all its promised opulence and attention to detail, is a place in which no-one wants to find themselves.

It was, however, one of the first casualties of the abandonment and the flight for safety can re-commence next year.

The most peculiar of the divisions in the AFL was Two. It started with very clear unpacking instructions that were meant to include Jack O’Connor’s Kildare, Armagh and Roscommon. But no county could impose themselves and although the latter two share top spot, a mere three points separates every county in the division apart from Fermanagh at the bottom with two rounds to go.

In the current situation, however, speculation is pointless in the absence of any authoritative time-frame and it may be simply that an incomplete league is be as much as 2020 will leave behind.