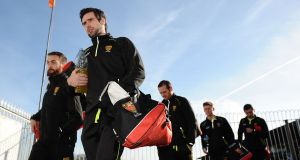 Tuesday morning, 8.35am, St Ronan’s Primary School, Newry. Kevin McKernan is in his classroom even though the UK went into lockdown on Monday night after Boris Johnson’s address to the nation. The Down footballer has been dragooned into service as a . . . well, he’s not entirely sure as what. Teachers are ostensibly on-site to take the children of frontline workers during the crisis. To do what or for how long or with how many, he can’t rightly guess at just yet.

“The feedback we’re getting is that numbers are going to be very, very small,” he says. “When you think about it, if parents are sending their children in here, they have to feel it’s the very last resort. It’s very hard on them, it’s very hard on everybody. We’re just weighing up what it’s going to be like. You’re waiting to see how many kids come forward to physically be here.”

In effect, a whole swathe of the teaching community in Northern Ireland will be repurposed as a free child-minding service for the next while. With the school year abandoned, they’re happy to help however they can and yet it’s not quite that simple either. They’ll be supervising the kids of NHS workers who will likely come into contact with the virus and yet they’re not being given any protective wear and the only government advice they’ve been given is to ensure social distancing rules.

For the teachers themselves, it’s the latest in a series of rolling adjustments they’ve had to make over the past three weeks. McKernan teaches in Newry, five miles from the border. While schools in the south have been closed for a week and a half at this stage, in the north they only officially shut over the weekend. Before then, a lot of them essentially took matters into their own hands and declared in-service training days for teachers, keeping everyone at home.

Mostly, they felt they had no choice in the matter. It made no sense that one part of the island was doing one thing while they were doing another. McKernan himself took to Twitter last Tuesday to rail at the absurdity of it all. “I’m prevented from training with my teammates, told to only travel when necessary & protect those most vulnerable! But go to school and work as normal in an environment of over 450 people. The children, their parents and my colleagues need a voice. Get your act together #Stormont.”

That’s only a week ago. Since then, the whole of the Britain and Northern Ireland has come to a standstill, leading to the situation where McKernan was one of the vanishing few people in the entire UK who went to work yesterday.

“It’s new for everybody,” he says. “It’s new for teachers, new for parents. I have my own kids at home and in all honesty, it’s a lovely time for me because I can spend more time with them. But it’s a very nervous time as well because I’ve got a lot of family around us. I’ve a granny and granda who are 80 and another granny at 88. You’re just thinking to yourself that you’d hate to pick up something that could cause a problem.

“It was surreal at work yesterday because you’re looking around at your colleagues and hoping that their families are safe and well and you know they’re thinking the same. It’s a very uncertain time for everybody.

“You talk to people around the country, everybody’s in the same boat. We’re waiting on parents to get back to the school to let us know whether they need the facility. And then the school can make a health and safety risk assessment based on how many adults they need around the place to cover the children that will be coming in.”

Like anyone else who would more usually be elbow-deep in sport, he feels the lack of it. Getting out for the occasional run but struggling a bit to get in the right sort of prehab and rehab. Keeping an eye on the press to see what the general feeling is around the place but dubious enough at the same time about any predictions he comes across.

“In this scenario, people worrying about whether they’re going to get leagues finished is honestly funny to think of. I saw a bit in the paper this morning where Kieran McGeary and Paddy Tally were both talking about an open draw knockout championship later in the year. And look, it would be brilliant.

“But here, let’s look forward to that without bombarding people with it at the minute. Let everybody look after their families and their priorities and we’ll hopefully get to play some football in the summer. But I don’t think it’s likely to happen this side of July, is it?”

For now, he’s in his own sort of limbo. Not a footballer, not really a teacher either just at the minute. A cog in the wheel, helping to keep the thing turning over. Doing his bit to help the people who are doing their bit to keep the virus at bay. The organisation of it all has been piecemeal and scattershot but it is what it is.

“Look, at the end of the day, the government have never had to deal with this. The government’s only up and going here. Imagine being landed with it as education minister and you only in the job a couple of months. I feel sorry for them in a way.

“But then again, I don’t at the same time because surely there has to be some guidance they can take from other countries in this situation. You’d think by now they would have been able to gauge what the best way of handling schools has been by looking at other countries. It’s just chaotic.

“And listen, we’re all adding to that chaos because of everyone’s uncertainty and worry around it. Hopefully now, with last night’s announcement in the UK and the measures they’ve been bringing in down south, hopefully in the next two weeks this will be brought under control to some extent.

“Someone was saying to me a couple of weeks ago that the least of our worries in a fortnight’s time will be did a child get enough homework or if the GCSEs would get finished.”

As predictions go, it’s about the only one that has been borne out.