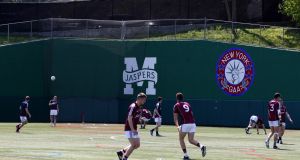 The GAA will await further direction from the Government before making a call on postponing a second scheduled Connacht championship match, between London and Roscommon, due to be played on May 2nd.

On Wednesday, the first of the summer’s championship fixtures to be postponed because of the coronavirus pandemic, also known as Covid-19, was the provincial preliminary round match between New York and Galway, scheduled for Gaelic Park on the same weekend, the day after London v Roscommon.

Calling it off was inevitable given the restrictions in the US city, according to Connacht chief executive John Prenty. Connacht counties rotate the visit to New York every five years and it was Galway’s turn this time.

“I’ve been in touch with New York and Galway all day,” Prenty said on Wednesday, “Galway in particular because they were under pressure about what to do about flights, as a lot of people are hoping to go. I spoke to New York this morning and they’re in lockdown and very doubtful that the game could be played there.

“Roscommon v London comes more into the category of local restrictions and so, we’re waiting for the next advice from Government. Anyway, you can go to London and back and stage a fixture in two days – it’s not the same as New York.

“Even the hotel in New York that we were planning to use for referees and officials has closed and won’t open until the first of July. The decision had to be taken and as soon as possible.”

Although there is no official comment forthcoming on the likelihood of the fixture happening at all, the press release from the GAA was ambiguous about the prospect of the match going ahead.

“The future for this fixture will be considered at a later date and in the context of the anticipated overall re-drawing of the national fixtures calendar for 2020 as necessitated by the ongoing disruption to the GAA games programme.”

When contacted for clarification, a Croke Park spokesperson said that it was an unusual fixture even in the ordinary course of events.

“It conforms to different criteria. It’s a stand-alone. We’ll monitor the situation as things progress.”

In relation to the London v Roscommon match, scheduled for the same weekend, it was being anticipated that there may be a further Government announcement next week detailing that the restrictions announced on March 12th would be extended beyond the original date of March 29th.

“We’ll wait until next week and see what the next signpost in the road is going to be. There’s not the same urgency because we can easily re-arrange if the signpost indicates that things could be improving by the end of April. I doubt it will be on May 2nd but it will take place because we organise games in London all the time.”

There is little belief within the GAA that the 2020 season will play out without major restructuring. The leagues are already certain to be abandoned in an incomplete state whereas there is increasing acceptance that the championship may have to shift to the old knockout format.

Accepting that as a possibility, Prenty believes that it would nonetheless prove a great success.

“I think we’ll have the best championship of all time if we can get it off the ground. We’ll have huge crowds because people will be just waiting to see matches. Wouldn’t it be great to be able to run off the championship in a matter of weeks after the all-clear is signalled? We might stumble on a template for the future.”

The difficulty with the prospect of a sudden-death championship is the consequent loss of revenue. Last year gate receipts totalled €36 million but the traditional format would more than halve the number of fixtures.

“It all depends how you look at that,” according to Prenty. “Gate receipts from the qualifiers wouldn’t be significant when you set them against the cost of running the games. The Super 8s when Mayo are in them are great but the crowds haven’t been huge.

“If you had your provincial championships, finals and then All-Ireland semi-finals and final, there’d be a huge interest.