Sideline Cut: He had to ask himself the hardest question: Could I be missing Pat Spillane?

Absence starkly illuminates the real point and genius behind the GAA 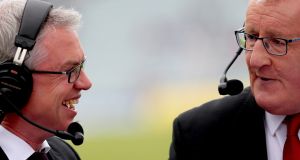 It doesn’t really matter just now what Brolly is ranting about: just that he is. There is comfort in that. Photograph: James Crombie/Inpho

It truly is a dark and fallen world when you find yourself fondly remembering Joe Brolly’s parka jacket. Remember that? Perhaps not. It already seems like some other distant lifetime, but on a bitterly cold night in Ballybofey in early February, Joe Brolly, Straight Outta Derry, appeared on the sideline wearing a coat with the most lavishly fur-lined hood seen on any screen since Julie Christie last stepped out in Dr Zhivago.

It was arguably the most provocative fashion statement in the history of the GAA, as though the association’s founding father Michael Cusack had somehow teamed up with Jean-Paul Gaultier to create a winter Gael collection designed to at once be completely practical and highly suggestive. What the garment was actually suggesting was anybody’s guess: like all great works of art, from the Bible to Hounds of Love, it was open to interpretation.

But at the time, to those of us watching on television, it was hard to escape the feeling that nothing good could come of this jacket and for Donegal, at least, nothing good did: the team was caught by an injury-time goal from Mayo.

The strange thing about the sudden and complete cessation of all GAA activity, on television and in the community, is that it forces unexpected and strange emotions upon you. A friend reported that he was out walking the other morning when all at once he was halted by an appalling but undeniable thought. He said that he was horrified and, for a few minutes, in complete denial. But then he had to ask himself the hardest question: Could I be missing Pat Spillane?

As it turned out, the dude simply had a very bad stitch. But it’s not just the cancelled games, the unfinished competitions, the abruptly halted storylines and the sudden silence and emptiness of Gaelic fields that had been, in all seasons, brimming with life, that are contributing to the sense of eeriness throughout town and country this weekend. It’s the profound change in the chatter.

The endless chit-chat about the games, on the television, on the radio, on podcasts, in the pubs and on the street: all stopped. After all, it is only a few weeks ago since the imposition of ‘the mark’ on Gaelic football was a subject about which people could debate as though it threatened the future of civilisation itself.

It’s not so long ago since the GAA’s annual report detailed healthy profits and a predictable chorus of grumbling about where all the bloody money was going to. It’s not so long ago since everyone was fretting over whether the Dublin senior football team would, in fact, prove unstoppable in their remorseless appetite for six, for seven All-Irelands in a row. Or when Tyrone yet again found themselves hauled before the public jury.

What does all of that hot talk and earnest debate look like now? Luxury. Pure luxury and beautiful distraction. Nonsense, in its own way. And of course, the chatter has not fallen completely silent. There are reports that Brolly, for instance, had delivered “a rant” against Taoiseach Leo Varadkar’s St Patrick’s Day speech. It doesn’t really matter just now what Brolly is ranting about: just that he is. There is comfort in that.

It’s the same with the vague talk of how the All-Ireland hurling and football championships might yet be completed in this extraordinary year. A return to the old straight, one-shot, knock-out All-Ireland championship has already been mooted. In the abstract, there is something thrilling about that thought: every game with significance, big counties falling. But that conversation, too, is just an idle comfort just now. Part of the weirdness of this moment is the wilful and necessary projections of when things return to ‘normal’.

So it’s reassuring to imagine a time, in June or July, when we can again flick on the box to become instantly agitated by Spillane or Brolly pontificating about the beauty of the knock-out system and reminiscing about “the world would end” if your team was beaten on a fine May Sunday.

At the same time, the truly horrifying spectre of what is happening in Italy and the frightening forecasts of what the coming number of weeks and months hold for Ireland and for countries across the world has rendered the playing of an All-Ireland championship at once tantalising and completely unimportant.

In this new time, it doesn’t seem at all important whether or not Dublin rampage to another All-Ireland or whether Kerry rise or even how the “so-called weaker counties” fare if some version of this year’s planned competition goes ahead.

What matters, in this catastrophic (remember when a goalkeeping error was casually described as catastrophic) moment, is the simple idea of doing something so pleasurable and inconsequential as heading along with friends, with family to Clones or Thurles or Salthill and to then happily go berserk because the referee has failed to notice this foul or that illegal pass or that brat of a corner back.

What matters is that the sudden and indefinite suspension of all of the common delights and infuriation and pet grievances that come with following the county team is already beginning to illuminate the real point and genius behind the GAA’s century-plus amateur, county-based games competition. Through the decades, it has created a hugely social nexus and tradition and pattern that had become an ingrained and dependable aspect of everyday life for hundreds of thousands of people.

And the sudden absence of that system, given the stark and life-changing issues facing everyone right now are, in the immediate part, is inconsequential but nonetheless deeply felt. What remains unknown is whether that tradition and pattern – the way of life – can seem to mean as much again.