Oval and out: Colin O’Riordan fears for the future as AFL pulls the plug on season

‘It’s absolute chaos and uncertainty, which is no different to the rest of the world I suppose’ 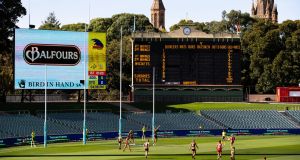 Action from the round one AFL match between the Adelaide Crows and the Sydney Swans at the Adelaide Oval on March 21st. Photograph: Daniel Kalisz/Getty Images

There’s surreal and there’s playing professional sport in an empty stadium surreal. Colin O’Riordan and his Sydney Swans team were in the Adelaide Oval last weekend for the first round of the 2020 AFL season. Just them and Adelaide and a few birds circling overhead.

When all was said and done, the people involved could hear every word that was said and you had to watch on TV if you wanted to see what happened. The Swans came away with a three-point win, unquestionably helped by the fact that they were only playing the opposition and not their fans as well.

“It was weird,” says the former Tipperary player. “It was my first time playing in the Adelaide Oval and you always hear the stories of the Adelaide Oval, the hostile atmosphere, the fans being on top of you and if there’s less than a goal in the game, the fans will generally bring the team home. We won by three and you’re thinking if there had been a crowd there, would they have made a difference in such a tight game.

“Having no crowd there suited the away team a lot more. You can imagine in a tight game, an umpire’s call could have been influenced by the crowd, something like that. So it worked out okay for us. But that was the end of it then. The league was suspended on Sunday.”

In keeping with the chaotic nature of, well, everything just now, the AFL suspended their season during a press conference that was held and broadcast at half-time in the Hawthorne v Brisbane game, the second last on the weekend schedule. And nobody in the league – not players, not sponsors, not supporters – knew what they were going to say before they started talking.

“On Wednesday last week we were told there was going to be an announcement. We didn’t know whether that announcement meant the season was going to be cancelled or that it was going ahead. They deferred the announcement for 24 hours until Wednesday night. The Carlton and Richmond players had the season opener on Thursday afternoon so they were given really less than 24 hours of absolute clarity on whether they would be playing or not. But in the end, the first round of games went ahead.

“Then there was two games to go in the first round of matches on Sunday and the AFL held a press conference at half-time in the second-last game. They announced that the season would be ground to a halt after the last game between West Coast and Melbourne. We obviously weren’t naive to the situation and we knew that was a possibility but we just didn’t think it would be as soon as it was. Of all the scenarios, we didn’t think what would happen was that they’d play one round of games and then stop it. But that’s the severity of the situation.

“Since then, the whole industry has shut down. It’s been a hectic few days with so much uncertainty. There’s been a lot of negotiating between AFL players and the AFL board and so on. With everything so up in the air, nobody wants to agree to anything too quickly. It’s absolute chaos and uncertainty, which is no different to the rest of the world I suppose.”

We think of professional sport as such a monolith, such an impervious Pac-Man money gulper, that the idea of a couple of months’ pause causing anything other than a scratch wound seems hard to imagine. But despite the AFL’s status as comfortably the biggest professional league in Australia – it had revenues of close $800 million Australian dollars (around €432 million) – the temporary shutdown has decimated workers across the league. Clubs have been laying off anything up to 80 or 90 per cent of their staff, with everybody up to and including assistant coaches being told to go home for a few months.

In that atmosphere, the focus over recent days has inevitably turned to the players. Like any group of gilded, TV-star professionals, they are presumed by the public to be well capable of absorbing a bit of a financial hit in the circumstances. And like any league anywhere in the world, that is certainly true of some but absolutely not the case with everyone.

The players’ union is in talks with the league to try and find a reasonable level at which to pitch the inevitable pay cuts. In the world as it is now, it’s difficult to find a lot of sympathy for their situation. Doesn’t make it any less real though.

“I think there’s an awful lot of anxiety around the league,” O’Riordan says. “Because at the end of the day, it’s your job. We’re hearing figures here of pay cuts anywhere in the region of 70 to 80 per cent. For any person in any job, that’s significant. A lot of players, whatever you read about average wage in the AFL, the numbers are always insulated by a few high earners. The average wage isn’t what most of the players are on, it’s inflated by the ones at the top.

“So a lot of people won’t be able to pay rent. That’s what it comes down to. If we don’t play games, if we don’t play sport, that’s our way of making a crust. If we can’t play sport, there’s no TV rights deals coming in, there’s no gate revenue coming in, there’s nothing happening. If the AFL aren’t making money, that’s it. I’m trying not to think about what happens if it goes past the 1st of June.

“If it does, it becomes a much different issue and I think an 80 per cent pay cut could be the least of our worries. People are trying to make decisions and there’s no deadline, there’s no way of knowing what lies ahead. Everyone’s trying to make a decision based on facts but there are no facts so it’s impossible.

“It’s all opinions and guesses and if someone’s opinion is wrong, that could have a major impact on someone else’s life. That’s the reality of it. At the end of the day, we understand that everyone’s in it together. The more you can stay close with each other, keep communicating, it’ll create a tighter community.”

Solskjær praises Pogba after strike sends Man United top 06:21
Andrew Porter ready to lay down a marker at Thomond Park 06:00
Joanne O'Riordan: Why I want to live a bit more like Ted Lasso 06:00
Garry Ringrose and Béibhinn Parsons honoured by Rugby Writers 06:00
Aisling McCarthy looking to develop on and off the pitch in Perth 06:00