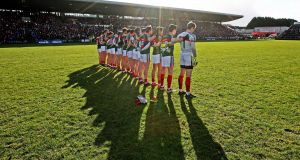 Mayo GAA have issued an online statement about how they are responding to the spread of Covid-19. The westerners are due back in Pearse Stadium in Galway on Sunday. Photograph: Donall Farmer/Inpho

The GAA is keeping its fixtures schedule under review in the face of public health concerns about the spread of coronavirus. At present there has been no impact on the association’s intercounty schedules, which have already taken a battering from bad weather in February.

A spokesperson for Croke Park said that the GAA would “follow whatever action” was recommended by the public health authorities and was keeping an eye on “an evolving situation”. No decision has yet been made about the remainder of the fixtures in the Allianz Leagues.

Asked would next weekend’s schedule definitely go ahead, the spokesperson simply reiterated that no decisions had yet been taken and neither had there been any discussion about whether it might be possible to go ahead with fixtures behind closed doors as is currently the case with soccer matches in Italy.

With Ireland’s remaining rugby internationals postponed and St Patrick’s Day parades following suit, an air of inevitability is developing around the viability of the remaining national league fixtures being completed on time.

The GAA medical, scientific and welfare committee was due to meet on Monday night and chair Dick Clerkin confirmed before the meeting that the matter would be on the agenda.

“I can’t pre-empt anything that might come from that but it will be dealt with. Whether it will be directly within our remit, I don’t know. This is more of a general administration matter rather than simply to do with medical issues around the playing of the games. This is about whether they go ahead, which is outside of our brief.

“Our concerns are more player-specific than the safety of public gatherings but we are the only committee with a medical remit and our members include some well-known and respected doctors, who may well have something to contribute in relation to this.

“Ultimately though the GAA will do what’s best for public health and as I said to somebody if the worst thing that comes of it is that a few football games, hurling games and rugby games are cancelled – if that’s as bad as it gets, we’d take that.”

Should the situation continue to deteriorate, it is all but certain that GAA matches will be called off, just as other sports are likely to experience the same should there be any curtailment of mass-attendance events – even allowing that crowds are always smaller in the spring than the summer.

The last major disruption to GAA schedules came in 2001 when there was an outbreak of foot-and-mouth disease in Ireland. Fixtures came to a halt 19 years ago to the week when all national fixtures were called off. Ultimately, the club championships were also halted, with the traditional St Patrick’s Day finals called off and postponed until April.

Ironically this season, for the first time, the club finals were moved forward to January as part of a graduated process to try to complete them within a calendar year. They were staged two months ago with Ballyhale Shamrocks and Corofin retaining their titles.

Had the old calendar gone ahead, it is likely that the fixtures would have to have been postponed.

In 2001, the leagues were completed but counties within the exclusion zone of the island’s only reported cases, in Armagh and across the border in north Louth, were unable to finish their fixtures.

In recent days, the GAA has been liaising with the HSE and all relevant protocols have been circularised to clubs and counties.

Mayo GAA have issued an online statement about how they are responding to the spread of the condition, also known as Covid-19.

“Mayo GAA and Croke Park are continuing to monitor the situation,” it read.  “Our advice is updated based on the latest information from the Health Service Executive and Department of Health. A sub-group of Mayo GAA Executive are in contact regularly to assess our community’s needs and to provide up-to-date information and advice to ensure minimal impact to all our GAA communities. This will be reviewed on a regular basis.”

Widespread disruption would be frustrating for the GAA, as it has managed just about to keep the leagues on track despite three major storms, which all hit at weekends. At present both football and hurling leagues are expected to be completed by the end of this month.

Assuming no immediate disruption, Wexford and Kilkenny will have home advantage in the upcoming hurling league quarter-finals. The GAA confirmed details of the fixtures on Monday after the outstanding matches in Division 1A were concluded last weekend.

Next Saturday Leinster champions Wexford will face their predecessors, Galway, in Chadwicks Wexford Park at 3.0. On Sunday, Kilkenny take on Waterford in UPMC Nowlan Park. Venues were decided on the toss of a coin.

Semi-finals are scheduled for the following week, March 21st and 22nd, with the final a week later.

The Division 2 hurling final between Antrim and Kerry will take place next Sunday at 1.0 as a curtain raiser to the Dublin-Meath football game in Croke Park.