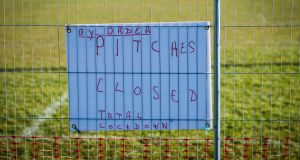 The GAA is expected on Friday evening to confirm an acceleration in its return to play programme. Pending the Government announcement in the afternoon on proceeding to phase two of the relaxation of pandemic restrictions, the association will unveil its own plans for the weeks ahead.

Phase two on Monday, June 8th will see walkways around club venues being opened for a period during the day and under supervision and although no further major changes have been flagged for next week, it is expected that clubs will reopen later this month – in advance of the original roadmap provision for phase four on July 20th.

This much was placed on the agenda a week ago by the GAA update on May 29th, stating: “We do not envisage a return to training in small groups in phase two and pitches and playing areas are to remain closed. However, as per the Government roadmap, this may be reviewed in phase three (June 29th).”

The GAA media call this Friday will include the recommendations of its Covid-19 Advisory Group, which sent its Return to Safe Activity document to Thursday’s meeting of the association’s management committee.

Whereas every single step along the road is dependent on the figures relating to the pandemic and its spread – and that may change abruptly along the way – the belief is that the GAA is planning for a pathway that leads to a resumption of club competition in August and intercounty matches in late September and October.

The steps are 1) a return to physical training, fitness and conditioning work; 2) skills training without contact; and 3) full engagement.

Although the argument that county teams are easier to direct and better resourced, making their return to activity more manageable, there hasn’t been any significant deviation from the intention to bring clubs back first.

This would give all players, including county panellists, the chance to resume matches before the intercounty championships make their return.

It is believed that a minimum four-week lead-in has been recommended for county teams for medical and conditioning reasons.

Although the expert assessment suggests that between 10 and 14 days of zero new Covid-19 cases would be needed to declare the virus in abeyance, a strategic balance will be struck to give any return to play protocols the best chance.

In relation to the regulatory provisions of any return to play, they are expected to lean heavily on individual responsibility – mentioned this week in a general context by the State’s chief medical officer, Dr Tony Holohan – in the filling in of questionnaires and immediate declaration of any symptoms.

Dressingrooms won’t be open and players will make their own way to and from venues. There is no appetite for repeated testing programmes to be run for county teams, as the expense makes them impractical.

The GAA has the additional flexibility that it hasn’t moved as fast as the Government relaxation schedules permit, which will allow it to speed up any return in the weeks between the public phase two and phase three. It has also been suggested that the Government might consider reducing the current three-week intervals between phases to two.

At present phase three is scheduled for June 29th with phase four on July 20th and phase five on August 10th.

A further issue for the county teams is the absence of any revenue for county boards in the past three months of no activity and the likelihood of much-reduced attendances at club matches in keeping with social distancing. This is bound to impact on the resources available for team preparation.

It is also likely that the juvenile activity Cúl Camps will be green-lighted for later in the summer.