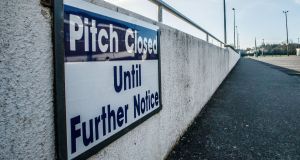 The GAA has confirmed that the walkways around many of its club grounds will reopen on June 8th. Photograph: James Crombie/Inpho

The GAA has confirmed that the walkways around many of its club grounds will reopen on June 8th and it also appears to be preparing for an earlier return to activity than originally envisaged should the Government’s relaxation of coronavirus restrictions proceed according to plan.

“The GAA continues to monitor closely the ongoing pandemic and the Government’s roadmap relating to the relaxation of restrictions,” reads the statement.

“The association notes that we remain in Phase One and await an update about the possible move to Phase Two on 8th June, as outlined by the authorities. Should the country move to Phase Two as planned, GAA Clubs will be able to reopen designated walking tracks on 8th June, subject to engagement with Croke Park around a facilities management plan.”

There are indications in the statement, however, that the original planned closure of club facilities until Phase Four on July 20th, may be relaxed should the Government move to Phase Two of its relaxation schedule on Monday week.

“We do not envisage a return to training in small groups in Phase Two and pitches and playing areas are to remain closed. However, as per the Government roadmap, this may be reviewed in Phase Three (29th June).

“The GAA can also confirm that it will publish its Return to Safe Activity Document when the Government signals that the country has moved to the second phase of its plan.”

This document is currently being finalised by the GAA’s Covid-19 Advisory Group and the anticipation appears to be that the report may signal an acceleration of the return to action protocols laid out earlier this month.

“This document will require approval from the Government’s own expert group on Return to Sport, which we continue to work with. This group currently considers Gaelic games a ‘Phase 4’ (20th July) sport.”

The Return to Sport group has been charged with green-lighting the resumption plans of all national sports bodies. It is not expected that such agreement would be an obstacle.

“Progress has also been made in reconfiguring the 2020 GAA Kelloggs’ Cúl Camps and subject to the country moving onto the next phase of its recovery, we will provide more details about this initiative.

“The GAA has stuck rigidly to the Government’s plan and dates from the outset of this outbreak and will continue to do so, taking advice from medical experts and our own Advisory Committee.

“We re-affirm our position that no one is keener to return to games and general games-related activity but this will only be considered when it is acceptable to do so to maximise the safety and wellbeing of our players, members and wider society.”