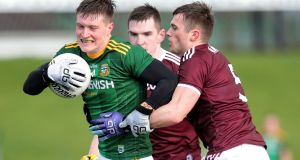 A new study commissioned by the GAA has shown that Gaelic footballers spend an average of just 2.5 seconds within two metres of other players during matches, offering encouragement on the road to kicking the sport back into life over the coming months.

The Newry-based company Statsports has delivered a white paper, similar to the one they provided for the Premier League to guide them on Project Restart, which has led to the return of English soccer.

It is the first ever study into player proximity in Gaelic football. Using data from GNSS worn by players, the numbers were taken from four intercounty football matches and five county training sessions in 2019 and 2020. Drawing an imaginary two-metre circle around the feet of each player, it measured the amount and duration of incursions into that circle by other players. It doesn’t account for time in dressingrooms or pre-game warm-ups

The average of 2.5 seconds per incursion is lower than their finding for soccer, which was just 3.3 seconds. They found also that the number of incursions is significantly lower – an average of 539 times per game in Gaelic football as opposed to closer to 2,000 in soccer.

The study draws a distinction between training and matches. The numbers for training are significantly higher than in matches, something both easily explained and not at all difficult to change. As former Cavan footballer and head of sports science at Statsports, Barry Watters, explains, it’s much easier to build space into training sessions where you are in control of what happens than it is in matches where you aren’t.

“We’re very confident and have a positive outlook that training can be modified on the back of this,” Watters says. “There can be less incursions, less time spent in contact. And it’s overwhelmingly to do with the amount of space that is used for specific training drills and situations.

“When it comes to participation numbers, I would presume the GAA will come to some sort of number that they think it’s appropriate for players to train in groups of starting off. With the Premier League, it was groups of five. It’s a lot different, obviously, but they spent two weeks in groups of five to begin the process of going back playing. In the GAA, even if you had groups of 10 to start off with, you would still have plenty of space on a Gaelic football field.”

The intercounty football teams on Statsports’ client list include Dublin, Mayo, Tyrone, Donegal, Monaghan, Meath, Cavan, Armagh, Laois and Louth. Donegalman and Statsports performance analyst Ryan McLoughlin did most of the heavy lifting on the study.

On the training side of things, the study recommends a rethink of how players cluster and gather during sessions. Things like drinks breaks, team huddles, general pow-wows over this drill or that need to be amended to put more space between bodies.

“We’re obviously not giving health advice,” says Watters. “We’re just trying to give an insight into what will happen if training does come back and if there’s a move to allow club teams or county teams to go back training over the coming weeks. If that’s what it to happen as we move through the phases, this should provide the coaches with some insight around how they can alter specific training sessions.

“The warm-up you used to do, you can’t keep on doing that. It has to be modified to allow more space between players. From the drill breakdown, we can see a lot of incursions concentrated around specific times. So what that most likely is is the players do a drill for an amount of time and then the coaches gather them into a group to talk about it and get feedback. So that’s easily fixed – you just make sure that when you’re pulling everyone in, that they space out better.

“Things like water breaks need to be accounted for. For rest periods between drills, players have to be told they can’t gather together in a huddle. The same for the coaches themselves obviously.”

During games, the longest any one player tracked in the study spent in the company of another was 58 seconds. This was, no doubt, a sticky corner back torturing his man and maybe even whispering sweet nothings along the way. The norm, however, was much shorter than that, the majority of incursions lasted less than a second. That said, players were found to spend an average 24.72 per cent of games inside two metres of at least one other player.

What does it all mean? That’s for the GAA to decide in the coming weeks. This study won’t mean the immediate return of games but it will help to inform those in the association who are trying to find a way to make it happen.

1 Serpentine stays on from the front to steal Epsom Derby for Aidan O’Brien
2 Monica Seles: The warrior queen who could have been the best ever
3 Eamon O’Shea: We spent quite a bit of time talking about older people rather than to them
4 Love tears them apart in stunning Epsom Oaks romp
5 Arsenal check Wolves to relight their European fire
Real news has value SUBSCRIBE