Even an improving Armagh unlikely to catch Tyrone 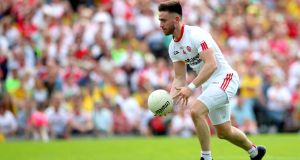 Pádraig Hampsey: Tyrone man has impressed both in defence and as an auxiliary forward. Photograph: James Crombie/Inpho

Armagh have broken the qualifying mark for a good year by quite a distance. For a Division Three team to reach the last eight of the All-Ireland is a strikingly rare achievement and they have improved and developed through a rigorous schedule in the qualifiers.

They have the added advantage of familiarity with the opposition, who curiously haven’t won a league or championship match against them for five years.

There, though, the positive stuff peters out in the face of Tyrone’s whirlwind progress through Ulster. Armagh may have come on impressively since losing to Down a couple of months ago but the ultimate fate of their conquerors in the provincial final must have concentrated minds.

Armagh’s announced team doesn’t include Andrew Murnin, who was withdrawn because of injury last Saturday but only after scoring 1-1, including the goal that proved the most decisive score of the evening.

If he’s not fit to play some part it will a significant loss for Kieran McGeeney’s team as the Lurgan full forward had been identified by Aaron Kernan as one of the main reasons for Armagh’s improvement this year.

Tyrone’s progress has been marked by a relentless tempo that opponents can stifle for a while. But ultimately they fall away in the face of it. Armagh have a comfortable structure by now with Brendan Donaghy playing sweeper and Niall Grimley excelling at centrefield.

Jamie Clarke’s displays as the guiding light of the forwards have been exceptional – apart from his early black card against Westmeath, which can serve as a kind of memento mori – but Tyrone aren’t hospitable towards overly dependent attacks.

Connaire Harrison did a job for Down against Monaghan both days but was swallowed up in the Ulster final.

There has been comment about how Tyrone have ingeniously compensated for their lack of a 24-carat attack by getting everyone to move forward and shoot when the opportunity presents itself but this multi-faceted menace tends to present itself at a later stage when the game has started to drift beyond their opponents.

They have their establishment figures in Peter Harte and Matthew Donnelly plus Seán Cavanagh as an eminence grise but the younger generation have also been impressive contributors to the ultra-fast counterattacking game, none more so than former U-21 All-Ireland winner Pádraig Hampsey, whose physicality as a defensive cog has gone hand in hand with impressive scoring returns when opponents tempt him forward.