The ending of this semi-final was all Joe Canning 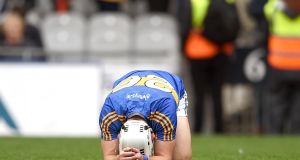 Joe Canning has a habitual way of moving across the hurling field, unlike any other we have ever seen. Canning is slower, more methodical than the average elite athlete.

It can look like nothing is happening. To avoid the vicious collisions of this peerless sport requires a level of patience that few possess.

Not that he avoided the physical exchanges. A yellow card was brandished on 28 minutes for clotheslining Paudie Maher. Canning might have been reminding Maher of last year’s thunderous shoulder. Seamus Callanan somehow missed the free.

Earlier Canning had put a similar one wide on a strange day when both would normally score these in their sleep.

Either way, he seemed to be increasingly frustrated with his lot. A sideline cut as half-time approached, created by his shoulder on Michael Breen, allowed him escape the opening stanza with credit. But not much.

“Yeah he did [struggle],” said Galway manager Micheál Donoghue afterwards. “A challenge for us was how do we get him into the game. In the first half it was bypassing him a bit. You want your big players on the ball.”

With camán propped on right shoulder and upright posture, perhaps due to years of back problems, he kept tracking the play.

“We moved him inside into the full forward line because there was a lot of ball going in but it just seemed wherever he was the ball was not going.”

The final analysis should absolve Ronan Maher, his primary marker, of blame as what decided this dramatic, and at times beautiful All-Ireland semi-final. It occurred when Canning moved away from Maher, and out near the right wing.

“We brought him out to midfield,” Donoghue continued, “just to get him through the lines and get him into the game.”

A game that will forever be associated with Joe Canning. And that’s despite the 28 -year-old being a statuesque, anonymous figure for long periods.

“He did get some traction when he came out to the 10 position,” said Tipperary manager Micheál Ryan. “He got at least 0-2 from there. He’s an outstanding talent but Galway have that talent all over the pitch now.”

Yet Canning grew into this contest with the timing of a man intent on shaping his own legacy, on ensuring Galway touch Liam MacCarthy at least once during a prodigious career now in full bloom.

The ending was Joe’s alone. A free he slashed from deep in Galway territory dropped way short. Canning tracked the play. Johnny Coen regained the clearance out on the right sideline and somehow knew to stall and turn around. From Loughrea to Portumna came ball from Coen to Canning.

The point that followed was magnificent and will last forever. Not just because of the sheer skill it required, but because it killed Tipperary when a replay was promised.

“When he gets a ball in that position there is a good chance that it is going to go over,” said Donoghue. “Big moments are defined by your big players. He really stood up to the mark.”

No argument about that anymore. Canning arrived at the exact moment he was needed to send Galway into a third All-Ireland final during the Joe Canning era.