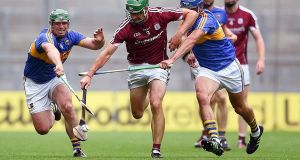 David Burke has been slowly building towards this point in his hurling career; All-Star awards, Leinster championship medals and All-Ireland club honours already tucked away.

An All-Ireland senior win with Galway is the giant empty box he still has to tick and something the St Thomas man has been pursuing with a tunnel vision for a number of years now.

It is that long-running personal quest to help Galway end their 29-year All-Ireland drought that the midfielder referenced when asked if he expects to be saddled with nerves ahead of the September 3rd final against Cork or Waterford.

Galway, of course, secured their passage to that showpiece event with a remarkable one-point win over Tipperary at the weekend.

“I suppose what I’ve been telling myself all year, or even in the last couple of years, is that I’m here to do this job and to see it out and to get it done,” said Burke, the Galway captain. “That’s the way I’m building it up for myself.

“My job being captain is actually very easy when you have Joe Canning, Colm Callanan, Aidan Harte and those lads on the team who have all been there for as long as I have.

“They say things at training that I end up not needing to say or they say other things at just the right time. Look, it’s obviously going to be a massive thing if we could bring the Liam MacCarthy Cup back to the west. We fully believe we can do it and we’re ready to do it.”

Dredge up any of the pre-match interviews from the 2012 or 2015 All-Ireland finals involving Galway and you’ll probably find players saying the exact same thing.

There are different dynamics at play this time though. Burke, who lined out in both those finals, is 27 now and leading a more experienced and physically stronger side that appears well-placed to finally deliver on its vast potential.

They will almost certainly go into the final as favourites, unless Cork or Waterford hurl up a storm on Sunday, though even that won’t be any great negative, according to Burke.

“We probably will be favourites but we have been favourites for every game this year so it won’t be any different,” he said.

“We just have to deal with that. It depends on how the game goes on Sunday. Cork could give Waterford a trimming and be favourites because they have been unbeaten as well. There’ll be nothing in that one either. It will depend on the likes of Austin Gleeson and Kevin Moran, all of Waterford’s big players, but I think Cork just have a better balanced team on paper, but it will be an interesting game nonetheless.”

Well balanced is a description Burke also applies to the current Galway team.

“A lot of them were there for the 2012 final though they were young lads at the time,” he said of his colleagues. “I think the group has matured a lot in the last couple of years and the age profile is probably in the mid-20s.

“The fact that we have a couple of key players playing well in the forwards is a big thing as well. I always said that if we could get the two Cooneys and Joe and these lads all firing, like, this year is probably the first time we have had all of them firing fairly well at the same time.

“Some of them have been carrying injuries in the last couple of years but when you have those lads on form, in that unit, it can only make things a lot easier. Hopefully we can keep lads injury free now. I don’t think we picked up anything the last day so it is about managing that time frame and peaking for the final now.”

Burke said the reality is that while there’s almost a month to the final, there actually isn’t much time for tweaking or experimentation.

“We’ll get in maybe two in-house games, something like that, and maybe four or five proper sessions,” he said. “When you think about it like that, it’s not a lot of time that you are actually together. We won’t know our opposition until Sunday either. We’ll maybe spend a week then looking at tactics in terms of who we are playing.

“Ultimately, and you saw it the last day, it comes down to simple things. It was just pure work-rate that got us over the line. That was portrayed in Conor Whelan’s hook on Michael Cahill, without that the game could have been completely different.

“It’s hard to know really, you can’t put a finger on any one thing really. We’ve obviously experienced this gap before an All-Ireland final so hopefully we’ll be a bit better prepared this time because of it.”