Dublin into first camogie semi-finals since 1990 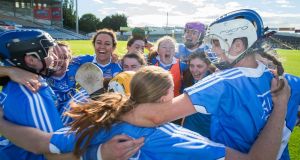 The Dublin team celebrate after the final whistle in Thurles. Photograph: Inpho

David Herity was basking in the glow of a job very well done as his Dublin side beat Wexford in Semple Stadium to reach the semi-finals of the Liberty Insurance All-Ireland senior camogie championship for the first time since 1990.

Herity has known plenty of glory as a five-time All-Ireland winner with hurling powerhouse Kilkenny but it was evident as he spoke after a thoroughly deserved seven-point win that this ranked highly in his career achievements.

Dublin will be even bigger underdogs than they were for this quarter-final when taking on their manager’s native county, who are champions and have won the last two Leagues as well.

“We’ve been hitting 30-minute and 40-minute games but we hadn’t produced the 60 minutes” said Herity on RTÉ2. “We knew it was in them and they showed it there. It was an incredible performance.

“We knew how good Wexford are. They’re in the semi-finals every single year. It’s 1990 since Dublin were in a semi-final. We knew we were up against it.

“We were feeling very confident going in. I know people had us as 6/1 outsiders but we knew deep down ourselves what we could do when we put our minds to it. The workrate, the skill that’s in the team, we’ve been saying it all year.

“There’s a revolution happening in Dublin. The Under-16s, the minors, the premier juniors were all in All-Ireland semi-finals. It was up to us to stand up to the plate and get the seniors into it and we’ve done our job. I’m delighted.

“We know we’re going to have to up it again but it’s great to be there.”

Wexford stormed into an early three-point lead into the wind but Dublin were dominant for the rest of the game except for a brief period in the second half, when the gutsy Yellowbellies threatened a comeback.

Dublin recovered to lead by 0-9 to 0-4 at half time, thanks to some excellent play by Aisling Maher, Hannah Hegarty, Eimear McCarthy, Eva Marie Elliott and Gráinne Quinn, as well as a vital penalty save by goalkeeper and player of the match Faye McCarthy in the fifth minute of injury time from Sarah O’Connor.

McCarthy, who was joint leading scorer for her side coming into the game, made two more excellent saves in the second half including one spectacular stop soon after the restart from Joanne Dillon and added two points from placed balls into the wind.

Dublin were looking comfortable, leading by 0-14 to 0-7 but substitute Linda Bolger pointed from wide on the left to spark a Wexford revival. Shelly Kehoe was among her side’s best players, along with sister Stacy, and she shot a brace inside a minute. When O’Connor landed a long-range free it was a three-point game with 12 minutes remaining.

The next score would be crucial and it came to Dublin, Ali Twomey pouncing to flick one-handed to the net after Wexford goalkeeper Nicole Fortune dropped Siobhán Kehoe’s delivery.

That knocked the stuffing out of Wexford as Twomey followed up immediately with a point and McCarthy also found the target before making another impressive stop from Stacy Kehoe.

Galway manager Mark Dunne revealed that it was a healthy respect of the dangers Tipperary offered that saw his charges impose themselves in such deadly fashion early on, settling this Liberty Insurance All-Ireland quarter-final at Semple Stadium by scoring the first 10 points.

The westerners will play Cork in the semi-final at the Gaelic Grounds on August 19th and it is a challenge they will be looking forward to after this clinical display.

At their best, Galway possess many threats and Tipp were unable to deal with most of them. To give Brian Boyle’s crew due credit, they recovered well to trail by just seven at the interval, 0-12 to 0-5, but Ailish O’Reilly’s goal early in the second half finished the game as a contest.

“We came down here to get the win” said player of the match Tara Kenny on RTÉ2. “Our only focus was this match. We’ll keep the head down for the next few weeks and go for it.

“We did lose focus there for a few minutes but at half time we regrouped and put the head down again.”

Getting out of the blocks was crucial according to Dunne.

“We got a good start and that stood to us throughout the game. We knew if we let Tipperary get a foothold in the game we’d be in trouble. It was probably easier than we thought it would be in the end but it was good that we pressed on and didn’t take the foot off the pedal too much.

“I’d say the fact we let it slip the last 10 minutes of the first half, let it slip maybe 10 or 15 per cent… so that kept us on our toes in the second half.

“We’re no longer favourites (in the semi-final) and that’s very fair I suppose. It’s where we want to be. We definitely didn’t take this game for granted. We know there’s bigger tests ahead but this should stand to us and hopefully it will, we’ll move on and improve again the next day.”

The McGrath sisters Siobhán, Orlaith and Niamh were all prominent in those early exchanges, while Maria Cooney and the balletic Niamh Kilkenny were also too hot to handle.

Ciardha Maher and Orla O’Dwyer took the fight to Galway in the second quarter and when O’Dwyer pointed at the beginning of the second half, it was just a six-point game.

O’Reilly’s goal gave Tipp a mountain to climb however and with the wind at their backs, Galway put the game to bed as Ann Marie Starr, Niamh McGrath, Aoife Donohue and Kilkenny kept the scoreboard ticking over.