Finishers: How the evolution of substitutes has changed Gaelic football 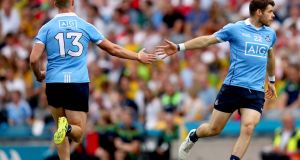 Kevin McManamon comes on for Paul Mannion during a Super Eights game against Donegal at Croke Park in 2018. Photograph: James Crombie/Inpho

For something so obvious, it still came as a bit of a surprise. In early 2016, Dublin’s Kevin McManamon was being interviewed at a league launch event and despite his crucial role in delivering three All-Ireland titles, he still came across as feeling a bit unfulfilled.

“It’s a big bullseye for me. I want to do something that I’ve never done before and that’s be a big player for 70 minutes, rather than what I’ve become accustomed to or what management have decided for me.”

As a replacement, ‘supersub’ in the vernacular, McManamon had delivered match-defining goals off the bench in the 2011 All-Ireland final and semi-finals in 2013 and ’15.

He shot two points from play in the 2013 final and if he was scoreless in the sodden claustrophobia of the 2015 All-Ireland, his energy drew a black card foul from Aidan O’Mahony – memorably captured in the RTÉ documentary on the match.

So, you want to march in the parade in September? “Yeah.” Simple as that? “Yeah.”

An All-Ireland is a big day and happily for McManamon he started both finals later in 2016, ironically making way in the replay for another definitive act of ‘supersubbery’ – Cormac Costello’s three points from play that sank Mayo.

Is there a sport that fetishises the starting line-up to the same extent as Gaelic games?

In Australian press boxes, local reporters have always been baffled by their Irish counterparts’ obsession over who started the Test matches. In the AFL, the interchange system starts to roll after about 90 seconds and no-one cares who was on the field at the throw-in.

But in Ireland, whether a player marches in the parade or in previous times appeared in those team photos taken before matches is important, almost like a distinction between full and provisional entitlement to the credit of a contest’s outcome.

Kevin McStay, former Roscommon manager and a football analyst with this newspaper, remembers the past when he began playing in the 1970s and things were simpler and more clear cut.

“This is a big thing in the modern game – in the past you’d three subs and were using them come hell or high water.

“Against that, when I was at school in St Jarlath’s I was on a team that never played subs. It wasn’t until the end of my time there in the late 1970s that Jarlath’s started using subs. It was seen as, ‘this is the best 15 and unless they get injured we’re not replacing them,’ which was an interesting theory that I hadn’t come across until I went there. For any players lacking confidence it was an assurance that they’d get the full 60.”

Could it be any more different now with match previews regularly anointing the team with the stronger bench as the most likely winners?

The GAA allowed replacements from an early stage but the transition from simply a coping mechanism for injuries to tactical facility has been relatively recent.

It’s surprising that even in professional sports that aspect of replacement took a while to be absorbed – legendary Liverpool manager Bill Shankly reportedly used one tactical substitution in the first two and a half years after its 1966 introduction.

Landmark coaching manuals such as Dick Fitzgerald’s 1914 ‘How to Play Gaelic Football’ and Dr Eamon O’Sullivan’s 1958 ‘The Art and Science of Gaelic Football’ make no specific mention of replacements – even though the latter details tried and trusted schedules from three decades of collective training when there is no specific reference to panellists as opposed to team members.

In 2000, a Kerry motion to annual congress succeeded in increasing the number of substitutes to five, initially just for senior intercounty matches. The 2014 black card sanction – requiring players to be replaced for the rest of the match for certain calculated fouls – increased the number of permitted replacements to six although with the advent of the sin-bin that has dropped back to five.

It still represents an opportunity to turn over a third of your team. One of Tyrone’s strengths in the 2000s was the interchangeability of the players, something manager Mickey Harte was able to exploit during matches when radically changing roles within the team and using his bench – to dramatic effect in the 2005 All-Ireland quarter-final against Dublin.

Kildare manager Jack O’Connor took his own county Kerry to three All-Irelands. He sees the role of the bench as primarily a way of managing the panel dynamic.

“In general you go by form in training and ideally you are looking for like for like. The reason form in training is so important is that it’s the only thing that makes sense to players, especially in the GAA because there is such a gap between championship matches. That’s an awful long time and unless you’re rewarding fellas who are going well they will absolutely lose motivation.”

McStay agrees with the importance of that.

“In the modern game it’s very hard to see a sub coming on if their form in training hasn’t been good. That is where the big decisions are made.”

The difference between the way footballers regard not starting and being replaced and how this is treated in other, comparable field sports may have something to do with the divide between amateur and professional, according to O’Connor.

“GAA players are more reluctant to buy into the automatic substitution than professional rugby or soccer players. If you’re a frontrow forward in rugby you’re probably going off after 50 minutes and it doesn’t necessarily mean that you’re playing badly. I don’t think GAA players have bought into that.

“It’s probably the next level in football. If you’re being taken off, congratulate the guy coming in and don’t get stroppy with the manager. But look, it’s an amateur game and maybe it’s a little bit of that.”

Is there an ideal prescription for a bench? McStay sees the broad principle of replacement policy as being dependent on circumstances but O’Connor believes in two specific principles: you should be bringing in experienced players to finish the match and that your style of play will change in the last 10 or 15 minutes.

“Take Kieran Donaghy, ” says O’Connor. “You’re going to be using the long ball more early in a game so it’s better to start that sort of player. If you are it’s because you’re in trouble and tactics are getting desperate. If the game is tight you’re not giving it away.

“Players like McManamon and in my time in Kerry, Darran O’Sullivan, who maybe suffered for it, even though he started a lot of games, but was so obviously dangerous coming in for the last 15 to 20 minutes, someone with his running power coming on against a tiring defender.”

The modern game also integrates technology into preparation and actual performance. Tracking devices tell managers when players are beginning to run on empty but O’Connor believes that there is still human judgment involved in such calls.

“If a fella is playing well and confidently, even if his needle is a bit in the red I think momentum and adrenalin will generally get them through. You can argue either way but they’re not robots; they’re human beings and get reserves of energy from places that can’t be measured.”

That human element was also mentioned over 100 years ago by another Kerryman, Dick Fitzgerald in his book, the game’s first training manual.

“Gaelic football fortunately does not tend in the direction of reducing its players to the mere machine level,” he wrote.

That’s probably why no-one likes to see themselves as a cog, no matter how successful the machinery.

4 Defeat to Burnley ‘a massive punch in the face,’ says Klopp