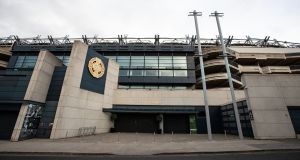 The GAA is to hold a remote special congress next Friday, April 17th. Photograph: Bryan Keane/Inpho

The GAA is to hold a remote special congress next Friday, April 17th. It is expected to have one item of business, an enabling motion authorising the association’s Management Committee to take decisions relating to governance and scheduling of competitions during the ongoing coronavirus pandemic.

This follows a remote Central Council meeting on Thursday, as reported in Friday’s Irish Mirror, and positions the GAA to be able to respond to what is now considered the inevitable extension of the current social restrictions, which will formally end any hopes of the summer’s championship starting on time.

Next week’s special congress takes place against a backdrop of uncertainty about when GAA activities can resume and anxieties about the severe financial shock that threatens if the championships either can’t go ahead or can only do so in a much abbreviated format.

According to one source, any rule change is not expected to have a sunset clause, which would see it lapse when the public health threat passes. This suggests it may serve as a permanent facility in any future pandemics or public crises.

The move is slightly unusual in that the GAA could simply have opted to run its affairs through Central Council, which is empowered to do so in the current Official Guide. According the Rule 3.43 (a), Central Council is the “supreme governing body of the Association between annual congresses”.

This however is a power that the council has traditionally interpreted very sparingly - just as during the operation of the old Rule 42 on the use of association property, it similarly was authorised to decide what games could be played at GAA venues but always made it clear that it wouldn’t move on the matter until directed by congress.

Handing such sweeping powers to the Management Committee, which is by rule a creature of Central Council, may implicitly involve the latter body but as another official observed, it’s a strange move to concentrate the authority in Management given that unpopular decisions may well be necessary and the broader the base of decision making, the better.

Options for the 2020 championship are entirely dependent on the size of the calendar window available once the staging of mass-attendance events gets the go-ahead.

Already it is accepted that the round-robin formats of the past two years will not be possible but whether that will be on the basis of the old sudden-death championship or - as is the GAA’s preference - the previous qualifier system, guaranteeing all counties at least two matches.