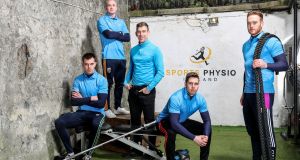 Never waste a good crisis. Joey Boland can’t claim any great foresight in how he has chosen to survive Armageddon, other than he shut his offices about a week before he was made do so. Boland, who last hurled for Dublin in 2018, runs Sports Physio Ireland in Fitzwilliam Square and when the storm started to gather the week before St Patrick’s Day, he pulled the shutters down. It gave him a few extra days to see if they could zig while others worked out if they were still going to be allowed to zag.

“We decided early on that we couldn’t be asking people to come in. Morally and socially, it wasn’t going to be possible. Even before the testing was ramped up and the really strict guidelines kicked in, we just pulled the plug. I couldn’t risk it, I wouldn’t have forgiven myself.

“We had an emergency team meeting, 10 of us on the Sunday night. We had three options. One, continue on as was and I was like, ‘we’re not doing that. Morally, it’s not on. If someone gets in here, goes home, sees their parents, spreads it and we didn’t do everything to avoid that scenario? No way, not doing it.’

The second one was shut up shop, everybody go on the dole, all 10 of us. And so the third one was, change it up, become a kind of a tech start-up and hit the online market rapidly. That’s what we’ve done.”

So in the space of three weeks, they’ve given their business a thorough overhaul. The Government’s Covid-19 payments scheme has made it possible to keep his staff in their jobs. Everything they do is done online now – personal training, physio, injury rehab. He rang around over 100 clients and brought in a blanket cancellation of their fees, pointing them to new online programmes for them to sign up to if they wished.

Over years, the online world was always something Boland meant to get around to giving more attention to. But his business was in the city centre and he had plenty of it coming through the door so it always went on the long finger. Being deprived of choice has changed the way he does business and already he knows there’s no particular prospect of it ever changing back.

“It’s really given us a kick in the hole. We’ve always wanted to do something online but now we have to do it. The economy we’re going to be going back to is going to be so different to the one we left. I think you’re going to see a lot fewer people working in offices in Dublin city centre.

“I would imagine it will be staggered reintegration, people coming into the office two days a week and working from home the other three. It’s been proven that people can work from home now and work practices will change, no doubt about it.

“So where before, our customer base was in a 2km radius around our office, there’s going to have to be a bigger mix of dealing with people coming into the building and dealing with them online. If somebody is going to only be working in town two days a week, they’re not going to sign up for a month’s membership, never mind six months. So we are going to have to do it in a hybrid sort of a way, combining in-person and online.”

One strand of Boland’s business is to provide physio to his former team-mates in the Dublin hurling panel. The new world we’re living in has changed that relationship overnight. There’s no training to go to, no team sessions to get players ready for, no rub-downs, nothing. How do you physio an intercounty panel when an intercounty panel doesn’t exist?

“He will set them a schedule of homework – you have to do x amount of runs this week, y amount of runs next week and hit top speed, that kind of thing. He’s onto between 10 to 15 of the players a week for a 45-minute session. There’s a bit of accountability there, getting your niggles right, getting your core in shape, making sure you’re doing your running programmes.

“The psychology behind it is difficult. How do you prepare for something when you don’t know when it’s going to be? Will it be behind closed doors? That uncertainty makes it difficult to gauge.

“The problem for people is going to be the not knowing. It’s easy to say that you have the time now to achieve the little bits and pieces you were putting off but doing that when you don’t know what you’re working towards is very difficult. How do you get focus and structure when focus and structure is out the window?

“But look. There’s no club player or county player who doesn’t have four or five deficits that can be improved upon and made better. Strength, core, flexibility – everybody has something. Even the best have something. For players’ mental health, that’s something they can be doing. Getting through this by being productive will be the key. I mean, what else can we do? Moan? Give out? Garden?”