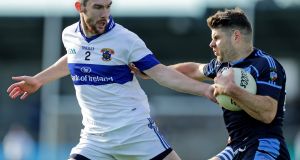 Halloween looms and St Jude’s are still going, still in there firing away long after most folk imagined they’d have had to holster their weapons.

Ever since the Dublin championship kicked up a notch after the All-Ireland was won, the Templeogue club have been beating the odds like they mean nothing.

Ballymun were roaring hot favourites in the quarter-final but Jude’s nailed them with a late winner. Even with that scalp hanging from their belt, they were available at 4/1 against St Vincent’s in the semi-final and they duly pulled off a non-surprise surprise.

They go into their first final since 2009 – and only the second in their 40-year history – as underdogs again. We can presume that Kilmacud Crokes won’t take much for granted.

“Yeah, it’s a funny one,” says Kevin McManamon. “I don’t really know how you’d make either side a favourite or an underdog to be honest. Neither team really has a pedigree. I suppose Crokes have a bit of history on their side but that won’t count for much on Monday.”

For Jude’s, it was about time they found their way back to a final. Having lost by a couple of points to Ballyboden in 2009, they went on to contest six of the next nine Dublin semi-finals and the 2-11 to 0-8 win over Vincent’s two Sundays ago was the first of them they’d won.

More to the point, they hadn’t come particularly close in any of the previous five semi-finals – their average margin of defeat in those games was seven points.

“Funny, it didn’t feel like a monkey off our back,” McManamon says. “It just felt like we were growing every year. We were confident going into the Vinnies game but we certainly weren’t making plans for where we were going to train on the Tuesday evening or anything.

“But I really felt if we did our stuff that we could beat them. After 10 minutes when we were five points down, I questioned it alright but this team doesn’t panic. They stayed calm and we went in four points up at half-time.

“The Ballymun game, we stuck with them through it and did a small bit of a smash and grab job at the end to win it. I loved that game because we didn’t play well and we won the game. And that’s something that if you’re going to win Dublin, you have to do.”

Like any top-end Dublin club team, Jude’s are a scarf drawn from several different threads of wool. The team that won a Dublin U-21 title in 2005 went on to backbone the club for most of the decade that followed and there are still a decent handful of them knocking around.

Niall O’Shea captained that team and went on to play for Dublin for a couple of years under Pillar Caffrey before emigrating to Australia. He’s back in Ireland and back in the team, a born leader and defensive conductor.

Underneath, they have Dublin U--21s coming through in the shape of Tom Lahiff and Ciarán Doherty. Also in the mix, they have their share of country lads with accents to slag.

Niall Coakley started the 2017 Munster final for Cork at wing-forward, Mark Sweeney has been blackening the M1 up and down to play for Antrim since 2011. McManamon describes Kildare defender Ciarán Fitzpatrick as “as good a corner-back as I’ve been picked up by in a long time”.

Their goalkeeper Liam Mailey is from Convey in Donegal and was on the fringes of the county panel during the summer.

“It’s an interesting one with the goalkeeper,” says McManamon, “because Paul Copeland was suspended at the start of this year after he got sent off against Vincent’s last year. And that gave Liam a chance and he’s done very well. Declan Bonner had him in with Donegal for the summer and he’s grown so much as a ’keeper. I didn’t know much about his career before he came to us but he’s had a great season and he’s a great addition to have. He’s been great competition for Paul who has probably had that spot for 10 years or so before this year.”

For McManamon, the run to the county final was especially timely. Though he picked up his sixth All-Ireland medal in September, it was one of those seasons where he was strictly a bit-part player for Dublin. He started just one game – the Super-8 dead rubber against Roscommon and was bypassed by Cormac Costello as Jim Gavin’s go-to first attacking substitute.

“I didn’t play a massive amount of football in the summer so I was excited to get back in. I’m absolutely loving it. I’m back playing with my brother and the lads I grew with and there’s a buzz around the club as well. We won our first ever senior camogie championship last weekend.

“The club was hopping after it. I’m trying to keep my head in the sand a bit, throwing myself into work this week. I’m busy until Friday, Monday will be a long wait.”

So the time has come, then?

“Ah, look I wouldn’t really think like that. I wouldn’t use that phrase. But if we get our stuff right on Monday, we will do ourselves justice.”

That’s all they can ask.

1 Gerry Thornley: After 32 weeks the Six Nations is back up for grabs
2 Stockdale and Ringrose on board with expansive Irish game plan
3 Allianz Football League permutations: Who needs what?
4 Ken Early: Project Big Picture endangers cushy position of ‘bottom 14’
5 Frank Lampard defends Chelsea’s rearguard ahead of Sevilla clash
Real news has value SUBSCRIBE