Underdogs diary: Dublin are on a different level but what a journey

More than anything else, the mindset of the Boys in Blue is what marks them out 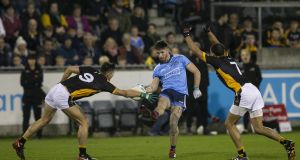 Eamon Donoghue of The Underdogs gets in a block on Dublin’s Robbie Gaughan during the game at Parnell Park. Photograph courtesy of Fingallians GAA.

Our Underdogs journey had a disappointing finale last Friday night in Parnell Park, as we took a heavy beating against the All-Ireland champions.

Despite facing a hungry Dublin panel looking to impress, having our entire preparation coincide with the business end of our club seasons, and being without key players for all or part of Friday’s encounter (because of those clashes) – we were still optimistic ahead of the match and deflated after it.

Dublin named five of this year’s regular senior panellists in their XV, with three of their All-Ireland final winning team included – Jonny Cooper, Eoin Murchan and Mick Fitzsimons. The others were the standout players from the Dublin club championship and their recent successful underage teams, and they will largely form the 2019 O’Byrne Cup squad.

They’ve been using the pre-season competition as a squad trial in recent years, and their newer players were hungry to prove themselves on the night. Far more so you’d imagine, then if they’d lined out with more of their big names.

Putting their strength in depth into perspective you only have to look at their 0-16 to 2-8 win over a full-strength Kildare team, on their way to winning the 2017 O’Byrne Cup.

After Friday’s match it was noticeable that not only were the Underdogs players being embraced by family and friends, but there were some emotional parents congratulating the Dublin players too.

Regardless of the new faces, Dublin played with the same selflessness and intelligence as we’d seen a few weeks earlier when they claimed their fourth All-Ireland title in a row. While our endeavour helped us create plenty of attacks, running into the tackle and poor option taking ended almost all of them. Down the other end it was almost hypnotic trying to defend against a team happy to switch back and forth, and in and out, until an opportunity presented itself.

Physically they picked some very big men, although it was probably their smallest player who caused the most damage. Skerries Harps corner forward Steven Smith scored 2-4, and he’s one to keep an eye out for, while Darren Gavin is an impressive athlete. Last year it was Brian Howard who broke through from their O’Byrne Cup squad, and a year earlier it was Niall Scully. No doubt some of these will be knocking on the door now too.

Our last challenge match before facing Dublin was against the UCD Sigerson team, where we lost by six points against a team littered with intercounty talent. In that match - while we were far from being at full strength - we were absolutely floored by the University’s ability to bring players of a similar quality on at key stages in the match. While our key players, for the most part, were needed for the full hour.

Jim Gavin’s Dublin teams – since he took over in 2013 and before that at under-21 level – have been renowned for the power and impact of their bench.

So while the first half felt competitive, what was to come after the interval was probably on the cards for a long time. Not only did Dublin have a far stronger overall squad in the first place, but for this fixture there was no limit on the number of replacements they could make. It was almost AFL style – with fresh legs constantly rotating and they really opened us up at ease as the contest wore on.

Dublin’s manager on the night was Paul Clarke, a former coach of mine in DCU and a key member of Gavin’s backroom team. He showed our team massive respect with his genuine words in the dressing room afterwards.

Another former DCU man and their captain on the night, Jonny Cooper, was one of the last to leave the pitch after the final whistle. Taking photos, signing jerseys. Most players would still be on a bar stool this soon after winning an All-Ireland, but here he was in the heat of battle. Even before the ball was thrown in. “We’re all playing for places” he told me afterwards.

Clarkey and Jonny are class acts – on and off the field – and it’s little wonder Gavin trusted them to lead and exemplify the squad’s principles and culture with so many getting their first taste with the senior squad.

For me Friday night highlighted Dublin’s greatest strength – their mindset. They are so disciplined, focused, relentless. And it was that which stands out more in my memory of the match than any moments of individual brilliance.

At half-time Jonny roared out some sort of code word and the entire squad literally sprinted into the dressing room. That summed it up really.

Even before we found out we’d be playing Dublin at the start of September, this experience was not going to be defined by the destination but rather the journey. And it’s been an unforgettable journey.

Already, several Underdogs players have had their intercounty managers make contact, and as other set-ups get up and running more are likely to do the same. So while this is the end of the series, it’s not the end for the Underdogs.

1 Ireland backrow of O’Mahony, Van der Flier and Stander to be retained against England
2 Tipping Point: Eddie Jones’s rhetoric is out of place in a febrile political climate
3 On healing and wild hurling: The re-education of Diarmuid Lyng
4 Triple bogey costs Rory McIlroy as Adam Scott prevails at Riviera
5 Eddie Jones continues to revel in putting rugby’s nose out of joint
Real news has value SUBSCRIBE

Wins for Wexford, Cork and Clare; Ireland to name updated squad for England trip 07:20
Dublin overcome the elements and Carlow 06:00
Tipping Point: Eddie Jones’s rhetoric is out of place in a febrile political climate 06:00
Leinster let their feet do the talking as they make it 17 wins on the trot 06:00
Dan McFarland calls out Ulster’s naivety after loss away to Ospreys 06:00
Crossword Get access to over 6,000 interactive crosswords